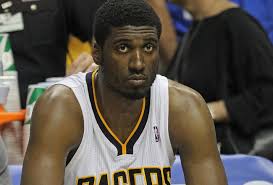 The Pacers have been so bad recently that bench demeanor of players like Roy Hibbert is being examined.

George Karl believes the Indiana Pacers are a broken team plagued by selfishness and a lack of confidence in the point guard position.

A head coach in the NBA for 25 seasons, Karl’s has no problem evaluating the mood and tenor of an NBA team and honestly sharing his thoughts.  The truthfulness that his players respected makes Karl one of the best analysts at ESPN.

“I think psychologically, they (Pacers) are broken,” Karl said on espn.com. “I think on the offensive side of the court they have lost their trust in one another.

Well, that doesn’t sound good, but it is definitely supported by the way the Pacers have played of the past three months.  Those, like me, who thought the Pacers were going to reboot with the beginning of the postseason appeared to be fools Saturday night when the Pacers fell apart in the third quarter.

Colin Cowherd said this morning on ESPN Radio, “If the Indiana Pacers were a TV show, they would be cancelled.”

It’s hard to argue with that given the level of indifference the Pacers showed during the third quarter Saturday when Jeff Teague and Paul Millsap combined to scored 28 points as the Pacers were outscored 30-16.

But I will argue with it.  I still believe as the situation becomes more desperate, and the situation will be as desperate as it can get on Tuesday night, the Pacers will find a way to rely upon one another rather than remain selfish.  Once that switch flips, the Pacers will embrace all the tactics that made them the NBA’s best team in the first half of the season.

If I’m wrong, and the scarcity of those saying anything near the same thing about the chances of a sudden reversal should tell you how hard it is to imagine a return to selflessness, there will be a lot of questions to be asked and answered be the front office.

There will be plenty of time to ask those questions if the Pacers fail to find the magic formula to right the ship.  If they make it to the NBA Finals, no one will remember anything about the last three months.

When smart people start talking about the Pacers being a broken team or calling them “wussies” as Charles Barkley did yesterday, it’s crazy not to respectfully listen.  But I’m betting that they are going to be able to put the team’s pieces back together before it’s too late.

There are too many smart people who know these chances don’t come around every year to allow this gold opportunity pass the Pacers by.  If the Atlanta Hawks are good and strong enough to send the Pacers into that good night, Karl and Barkley will have been proven right.

It’s not going to happen.