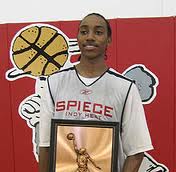 Jeff Teague was the most valuable player for the Spiece Indy Heat in 2006. The Heat would spread the floor and let Teague operate. Sound familiar?

As a young basketball player, Jeff Teague was exactly the same as he is today – doesnt really scare you in any way, but he usually found a way to win.

There were very few made three-pointers, no highlight reel dunks, and a stoic look that made those playing against him wonder whether he cared.

Once you watched him for a few games, the same deadly element that is proving troublesome for the Pacers came into focus – Teague changes speed more quickly than almost anyone in the game, and changing speed is the key to creating space.

How little respect did Teague generate among those who watched?  There are 18 high school juniors chosen to compete for the Indiana All-Stars each year.  Teague was not among them in 2006.  When he committed to Wake Forest, people were stunned, “How can Jeff Teague play in the ACC when he wasn’t one of the best 18 players in his class in the state of Indiana?”

Teague answered by averaging 14 points as a freshman and 19 as a sophomore, and the long distance shooting that was an afterthought for defenders in high school and during the summers became a great weapon as he shot 44% from beyond the arc in his second year.

After stunning the still difficult to convince Indiana brain trust by being drafted 19th overall in the 2009 NBA Draft by the Atlanta Hawks, Teague has increased his value each year.  His scoring average has trekked  north from 3.2 to 5.2 to 12.6 to 14.6 to 16.5 over his first five years in the NBA, and with it his defense has improved too.

During the offseason in 2013, Teague signed a four-year, $32 million extension.  That’s a lot of money for a guy who wasn’t too well respected eight years ago as a junior at Pike.

And now Pacers coach Frank Vogel is spending a lot of time trying to figure out how to keep Teague out of the lane, just like youth coaches did when Teague was 11-years old playing for Riverside.

On Saturday night, Teague scored 15 of his 28 points in the pivotal third quarter that allowed the Hawks to build a 14-point lead heading into the fourth.  He did it in the same way he always has – changing speed and playing a tough to defend cerebral game.

The lack of respect continues today as the Indiana hoops savants routinely omit Teague as lost gold for Indiana programs.  Yes, Indiana lost out on Greg Oden, Mike Conley, Courtney Lee, Josh McRoberts, Tyler Zeller, and on and on, but Jeff Teague is almost never on that list.

Teague was and is a quiet guy who let’s his game talk, and just like it did against dozens of high school and AAU programs from 2003 to 2007, it’s speaking very loudly for him.