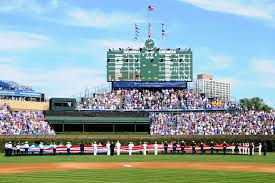 Wrigley Field isn’t unchanged in my lifetime, but it’s close enough that I spend more time being bombarded by memories rather than watching the game when I make a pilgrimage there.

Sure, I’m pissed off that the Cubs have no chance to win this season or next, and that Tom Ricketts lies to fans as he tries to germinate false hope, but that doesn’t diminish my love for Wrigley Field nor my memories of it on its 100th birthday.

Driving south with my Dad from north suburban Lake Bluff was an oft repeated tradition in my family that evolved into taking the Chicago Northwestern to Davis Street, and hopping the Howard to Addison, and then to putting my son on my shoulders for the six block walk north from our apartment for a day in the bleachers, and finally to pulling him out of school in Indianapolis for a drive to the ballpark.

Wrigley Field is a joyful place where generations of families have bonded for a full century.  Countless dads, including my own and then me, taught their sons to keep a scorecard and discuss America’s game during spring, summer, and fall afternoons.

It was where I got Fred Whitfield’s autograph instead of Pete Rose’s when prompted by my Dad to “get the guy in the red hat to sign this scorecard.”  It was where my wife and I took our son on his first trip outdoors on the day he turned one month old for a doubleheader against the Dodgers.  Of course, the Cubs were swept.  And it’s likely where my son will teach his kid(s) to appreciate the most social spectator event in the world.

I cried like a buffoon when the Cubs circled the field on Harry Caray Day – the last home game of the 1989 season – as fans waved their rolled up posters and cheered for the soon-to-be National League East champs.

Sitting in Wrigley for Game Seven of the 2003 NLCS, I learned what collective despair sounded like as 40,000 fans silently filed out after watching the Cubs lose their last best chance to go to the World Series.  And it was where I stood anxiously in line to pay for the NLCS and World Series tickets I was given the right to buy by the Cubs for sitting in the bleachers throughout most of the 1989 season.

The red marquee sign was the most beautiful thing I had ever seen when it appeared from behind the trees on West Addison as my Dad drove toward the ballpark for that first ever game I had seen there.

I waited for Don Kessinger (#11) go build a 1-1 count with one out, so my Dad could look at the iconic manual center field scoreboard and say “Aces wild!” as he always did.

Roberto Clemente was thrown out at the plate by Kessinger on a caught pop up in shallow left field in a game that ended a 1-0 Cubs win on a Joe Pepitone home run in the bottom of the 12th.  I saw the homer on TV because as always we beat the traffic by leaving at the end of the seventh inning.  Ken Holtzman threw all 12 innings, and the game took a total of 2:35.

It’s the place my wife and I spent our honeymoon in 1987.  Game after game of futile baseball played by Mike Brumley and Paul Noce instead of the injured Shawon Dunston and Ryne Sandberg before we headed to blues bars on Halsted.  Guess which one of us planned the itinerary for that trip, and who was the best sport in the world as she enjoyed it.

I sat in awe in the right field bleachers as Andre Dawson would turn loose a throw that seemed to gather speed and rise as it beat a runner trying to go from first to third on a base hit to right, and watched Billy Williams get up on his toes in left field as every single pitch was delivered.

Standing outside of the Cubs parking lot in 1977 hoping for an autograph, I saw virtually every Cub get into his car holding a plastic cup of beer.  Seemed cool rather than dangerous at the time.

Teeth hurt? Click here to get them fixed by the best – Dr. Mike O’Neil of Today’s Dentistry

As Fergie Jenkins was pulled from the final great start of his career with a 3-0 lead in the top of the ninth with two outs, I sprinted to the fence just to the home plate side of the visitors dugout from my seat screaming at manager Lee Elia that his termination was imminent.  He was fired four days later.

The best pitchers’ duel I’ve seen was in May, 1988, as Cardinals starter John Tudor and Cubs ace Greg Maddux both threw nine inning shutouts.  Tudor faced the minimum through seven innings, and allowed three hits on a total of 79 pitches.  Maddux threw 10 2/3 innings of shutout ball that he ultimately lost because a ground ball by Luis Alicea hit the lip of the infield grass, and bounced over Ryne Sandberg’s head.  That 11 inning game lasted only 2:41.

Randy Hundley stealing home, Rich Bordi missing a no-hitter because of a flare double by Garry Maddox, the first official night game, a Clay Carroll balk for a Cubs win, and hilarious heckling of Lenny Dykstra were among a million more memories seared into my memory through a lifetime of afternoons and evenings at Wrigley Field.

But being a Cubs fan at Wrigley Field isn’t about baseball or the alternately excellent and pathetic exploits of the Cubs and their opponents.  Sitting among family and friends talking and sharing during a game that plods along at a pace deliberate enough to allow the mind to wander defines the place.  It’s about sons and fathers sitting together on a sunny day sharing an indelible experience.

Wrigley Field is a generational touchstone that evokes very specific memories of days long past with those we loved now departed for a place where bad hops, billy goats, and Don Young can’t torment them anymore.

Who would have thought after 100 years of hosting futility that looking back at Wrigley Field would be much more rewarding than looking ahead toward what’s to come?