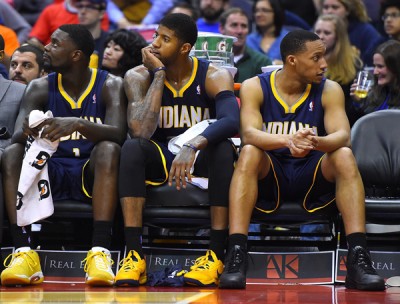 Whether Lance Stephenson and Evan Turner had a fistfight in Friday’s practice is the latest fascinating pieces of the Pacers puzzle.

Whether Lance Stephenson and Evan Turner squared off in practice Friday afternoon, the questions that Pacers coach Frank Vogel has to answer before Game Three tomorrow night are many.

The status quo wasn’t working last night, so the equation was changed.  Luis Scola and C.J. Watson not only played well, but with energy the players they replaced lacked.

Offensive sets clicked, players got on the floor after loose balls, and the defense swarmed the ball.  Everything changed, and the hopes for a successful postseason returned.

So now what the hell does coach Vogel do in Atlanta tomorrow night?  Will Watson and George Hill be on the floor at the same time more often?  Can Luis Scola and David West play together?  How will Stephenson adjust to fewer minutes if Watson replaces him?  Will Roy Hibbert be okay with being a cheerleader?

Now with reports of a fistfight during Friday’s practice between Stephenson and Turner, how does that affect the chemistry of the team.

This Pacers season continues to confound and mesmerize as expectations are constantly defied.  Just when you think the Pacers are fixed, they appear weak if not broken.  Just when it appears they have fallen too far to rescue themselves, they resurrect hope with spirited play and a dominant win to even the series against the Hawks.

Stephenson in particular is a mercurial man with equal parts passion and athleticism.  He can create offensively in ways no other Pacer is capable, but he can destroy consecutive offensive possessions through pounding the ball.  His risk-reward ratio fluctuates wildly from game to game.

He can be supportive or sullen, but fans love him.  Of all the Pacers, he is the only one who would have been right at home as a Bad Boy of the Detroit Pistons, but that doesn’t reflect the mostly nice guy personality of the team.

Contract hopes and dreams might be a factor in Stephenson’s behavior as he currently earns less than 1/14th of Hibbert’s salary, and the Brink’s truck is fueled and ready for the trip to Lance’s house.  How much cash will be in it is still to be determined in part by how he plays during this postseason.  Minutes shrink – dollars shrink.  That’s surely not lost on Stephenson.

What about Paul George’s reaction to the yipping and yapping from Hawks point guard Jeff Teague.  Can that motivation be sustained through games three and four in Atlanta?  George at his best is one of the best two-way players in the NBA, but his Player Efficiency Rating ranked only 26th through the regular season.  Which George will show up?

Vogel has a lot of decisions to make, and the fragile emotional state of the team is a factor in all of them.  If Turner and Stephenson are ready to throw down in a practice, imagine Stephenson’s response if Vogel’s decisions are perceived to adversely affect his next contract.

This drama appears to have no end, and if I didn’t want the Pacers to win because I enjoy watching them play, I would want it to go on forever because the curiosity in what might come next is riveting.  I wouldn’t want Vogel’s job for any amount of money, but from a distance this might be the most interesting team since the Bronx Zoo New York Yankees of the late 1970s.

Another game tomorrow night, another chapter in the is intriguing saga.  Like sands through the hourglass, so are the days of our Pacers.

2 thoughts on “Indiana Pacers – Stephenson vs. Turner fistfight? Another chapter in “As the Pacers Turn””