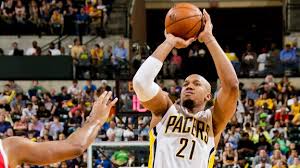 The veil of misery was lifted for a beautiful night in Indianapolis, and whether or not it remains in the trash bin of the past, it was great to watch the Pacers play with some joy for the first time in months.

Home wins against the Chicago Bulls and Miami Heat were grind it out affairs with a positive outcome, but the second half tonight was a mirthful romp in the 101-85 dissection of the Atlanta Hawks.

There was a time when the Pacers owned the third quarter.  Teams with the temerity to stick with Indiana after the first half were routinely vanquished during the following 12 minutes.

With the season on the line in Game Two of the best-of-seven series against the Hawks, the Pacers went to the locker room at halftime staring at a 52-48 deficit.  Fail to compete in the second half, and they would have been belly up like a goldfish in an aquarium cleaned with Top Job with no one to blame but themselves.

Focus returned to Bankers Life Fieldhouse just in time with the Pacers holding a 68-65 lead with 3:33 left in the third quarter.  Paul George, David West, and the prematurely eulogized George Hill asserted their will on both ends to reel off a 19-0 run that ended with 9:03 left in the game and the Pacers ahead for good 87-65.

The vapid stares that seemed to be permanently etched on the tired faces of the Pacers over the past two months were replaced with joyful grins and laughter.  Roy Hibbert, so maligned since his unfortunate and ironically selfish remark about “selfish dudes” became the team’s biggest cheerleader.

Whether this beautiful half of basketball marks the renaissance of the team Indianapolis fell in love with as a dominant team-first defensive juggernaut, or a temporary glance back through the looking glass of potential – we’ll see on Thursday night in Atlanta.

Paul George had the gaudiest stat line with 27 points on 9-16 shooting (5-7 outside the arc) 10 rebound, six assists, four steals, and a +/- of +29, but equally important was the accuracy and energy of Luis Scola.  People who began to criticize the Scola for Gerald Green and Miles Plumlee trade are likely dialing it back quite a bit after tonight.  Scola turned back to clock to score 20 points in 19 minutes on 9-14 shooting.

Most importantly for the Pacers were the 25 assists on 36 made field goals.  When the Pacers are generous and move without the ball, they tend to score.

Tonight, the Pacers finally looked like a one seed with the best home record in the NBA, and the Hawks like the eight seed with a 38-44 record.

The road to advancing to the second round against either the Bulls or Washington Wizards became clearer tonight.  A Pacers win in Atlanta either Thursday or Saturday makes the loss in Indy moot, and all of a sudden the Pacers will own home court advantage again.

The Pacers will board a plane smiling, and there is something to be said for that.  This team tends to play to its mood, and the longer the happy times last, the longer they are likely to continue.

Stealing one in Atlanta is now the focus.  Let’s see if the bounce back continues.