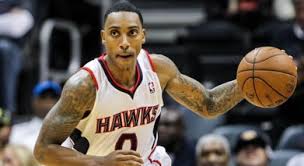 Jeff Teague may be virtually emotionless on the court, but so far in this series he has been the best competitor on the floor. If that doesn’t change, the Pacers season will end before April does.

This up one game, down the next stuff is getting monotonous.  The Indiana Pacers did a lot of good things – only 13 turnovers, allowed only four offensive boards, had five more steals than Atlanta, and made four more field goals.  Sadly, none of that matters a damn when outscored by 14 points at the foul line.

As a result of this strange and uneven effort, the Pacers lost Game Three to the Atlanta Hawks 98-85.  The tonnage of Jeff Teague and Kyle Korver’s 22 and 20 points didn’t kill the Pacers, but the timing of their scoring did.

There were glimpses of hope throughout the game, but it never seemed likely the Pacers were going to be able to get over the hump.  Each time the door opened a crack, Teague or Korver shut it.

Teague’s three-pointer after stepping out of bounds as the shot clock ran down to zero was the final dagger as a six-point lead became nine with 2:48 left in the game.  The officials reviewed the play, and the replay showed Teague was out of bounds but re-established residency within the boundaries before launching the shot.  Whether the shot was from beyond the arc is reviewable, but that Teague stepped out prior to taking it isn’t.

Such are the vagaries of the NBA’s moronic replay system that draws refs to the center court monitor like moths to a porch light, repeatedly interrupting the flow of the game.  If you can’t review whether a guy with the ball is in bounds, what the hell good is the system?  And if the referees aren’t able to see a player with the ball step out of bounds, what the hell good are they?

Speaking of ridiculous officiating while using the monitor, how about the offensive interference non-call to end the first call?  C.J. Watson clearly touched the ball while it was in the cylinder, and unless the rule has changed, that bucket should have been disallowed.  But I digress, especially since the call benefitted the Pacers.

A team that finished the regular season six games below .500 are making the top seed in the East look weak, and with a win Saturday afternoon will earn three bites at the apple to send the Pacers season to a premature dirt nap.  It isn’t like the Hawks lucked into two wins.  They flat out beat the Pacers – twice – and badly.  Jeff Teague, for the love of God.  JEFF TEAGUE!  How can Jeff Teague be the best player on the floor during a playoff series?

The Pacers aren’t dead yet.  It’s cliche to say that a team needs to assert its will to achieve, but that’s exactly what the Pacers need to do in order to win Saturday.  The Hawks are outmanned at virtually every position, and the Pacers are playing against them like they are an unholy combination of the 1986 Boston Celtics and 1996 Chicago Bulls.

It’s just not that tough to beat a 38-44 team four out of seven times.  Good thing this is best-of-seven and not best-of-three.

So beyond will, what needs to happen to bring the Pacers a win in Atlanta?  I like the small lineup that Frank Vogel uncorked with 9:23 remaining as David West entered the game for Ian Mahinmi.  Roy Hibbert might be disappointed to sit for the final 17:30 of the game, but if a center can’t defend, rebound, or score, he has no business being on the floor.

Scola and West appeared to functioned reasonably well together on the floor.  C.J. Watson needs more minutes too. Oh, and maybe move the ball a bit more quickly so the Hawks can’t trap on almost every catch on the wing.

Words are cheap, and the talk of the Pacers as a championship team appears to have been nothing but talk.  Championship teams compete for one another, and find a way to make every possession count on both sides of the floor.  If the Pacers want to wait for the switch to flip as it did Tuesday night at Bankers Life Fieldhouse, they will certainly fail to advance beyond the first round.

And the switch isn’t out there in the ether someplace – it’s inside each of them – and flipping it is as simple as making the decision to keep Teague out of the paint or refusing to allow Korver to catch because if you do neither, losing is the certain result.

Even with all the panic and consternation among fans, the Pacers are a win in Game Four from taking control of this miserable series.

It’s a shame that the Hawks appear much less likely to go quietly Saturday than the more talented Pacers.

4 thoughts on “Indiana Pacers revert back to form in wasted Game Three; fall 98-85 to Atlanta”