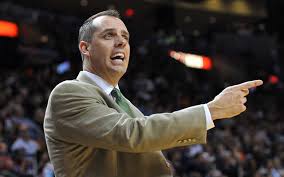 Frank Vogel spent three years succeeding beyond anyone’s expectation, but may be fired for a bad three months if the Pacers lose tonight.

Did Indiana Pacers coach Frank Vogel suffer a massive head injury while I wasn’t looking?  Did he get dumb all of a sudden?  Were his biorhythms in perfect sync for the first three years as the Pacers coach, and then spin totally out of kilter?

Pacers president of basketball operations Larry Bird claimed when he resigned as coach in 2000 that coaches have a three-year period when players respond to them.  After that, there is an unavoidable tune out.

What really makes team executives smart is sticking with the smart coaches through mostly thick and a little thin, and that is what Vogel has helped bring to the Pacers.  There are times when changes need to be made, like when Isiah Thomas, Rick Carlisle, and Jim O’Brien were fired.  Those were well-timed obvious moves.

Through the first three years of his run, Vogel could only have been described as a spectacular success.  Each year under Vogel’s steady hand, the Pacers moved a step further in the playoffs.  Each year, the expectations have grown.

The issue for the Pacers is not the wins and losses, but the failure to measure up to reach the bar set by the 33-7 start to the 2013-2014 season.  A team that wins that many that quickly by that much must make the NBA Finals, right?

Well, maybe, but the Pacers sure haven’t played like potential finalists against the formerly mediocre Hawks, and tonight they will either find a way to relentlessly compete or wilt under the pressure.

Either way, Vogel may be in trouble.  But what part of this current mess is attributable to how Vogel has handled any of the challenging situations?  He consistently supports, empowers and enlightens his players.  That is what the best leaders do.

There will be consequences for failure, as there always should be in sports and business when a team fails, but before the Pacers tell Vogel to clean out his desk, they need to assess what Vogel might have done differently to change the result.  More importantly, they need to know that whomever they might hire would have done it differently – and better.

I don’t claim to have intimate knowledge of every potential candidate for the Pacers coaching job, but Vogel is exactly the kind of guy who I believe does that job best.  Fans like coaches who share their angst and aren’t afraid to display it.  Vogel  is invested in his players, and anger is the tool of the self-immersed.

After three years of great success, the Pacers have stumbled through three months of mediocrity.  That’s not enough to justify firing Vogel.

There is every reason to believe that the same qualities that brought escalating results in 2011, 2012, and 2013, may bring even more success in 2015 and beyond.