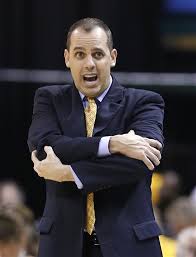 All eyes will be on Frank Vogel tonight as he coaches what could be his last game on the Pacers bench.

Dime store philosophy tells us to live each day like it’s our last.  Indiana Pacers coach Frank Vogel needs to to heed that advice and lead tonight like this might be his last as an NBA head coach.  Because with a loss, it might be.

Doing the same thing over and over, and expecting different results defines insanity.  Vogel has been a big proponent of dancing with the girl that brung him – or being loyal to the same five guys regardless of the match ups.  Through the first half of the season it worked very well.  Insanity or loyalty will be the verdict of coach Vogel’s leadership after tonight’s Game Six in Atlanta.

Either Vogel’s far-sighted, confident, and conservative response to adversity will be applauded because the Pacers find a way to win tonight and Saturday, or seen as the most obvious cause of the dissolution of what was thought three months ago to be a championship contender.

That Vogel is now considered a candidate for the scrap pile of failed coaches is the result of what could be one of the more profound collapses in modern sports history.  With the Pacers at 46-13 a couple of months ago, Vogel appeared to be among the five most secure coaches in the NBA.  Now, with Mike D’Antoni out as Lakers coach, he’s neck and neck with Golden State’s Mark Jackson as the next to be canned.

No matter the strategy, a loss tonight will be hung on the personnel decisions made by Vogel.  Even if the Pacers lineup is adjusted tonight, fans and media will claim it came later than it should have regardless of the result.   That’s the burden of coaching in professional sports.  Win and the players are great.  Lose and the coach sucks.

The first thing coaches need to do to keep their jobs is out coach the fans, and with all-star center stumbling around on both ends, fans know that either Luis Scola or Chris Copeland are better options.

Hibbert has been the poster boy for ineffective play since the Heat game where he took a blow to the head from LeBron James, but Vogel knows the Pacers need Hibbert if they are going to beat the Miami Heat in the Eastern Conference Finals.  As sensitive as Hibbert is, benching him could throw his mood kattywampus.  Play him, and the Pacers could easily see their season end tonight in Atlanta.

Not an easy decision because there may not be a right answer.

Lance Stephenson is a one-man dilemma for Vogel.  He’s capable of incredibly productive one-on-one play, but his pounding the ball corrupts the rhythm of the offense and causes teammates to stand around and watch.

Just as hustle on defense brings crisp movement offensively, standing on offense causes lethargic defense.  Stephenson knows how he plays best, but when that corrupts the team’s energy, his presence becomes a problem.

The issue isn’t that Stephenson values his own production over winning, but that he sees himself doing what he does best as a change agent for the team’s fortunes.  There are enough times when he’s right to justify that confidence – at least in his own mind.

Vogel needs to weigh the enormous pros of Stephenson’s play against the substantial negatives.  That’s why he makes the big bucks.

Click here to get a free oral cancer screening with your next dental exam by Dr. Mike O’Neil at Today’s Dentistry

To think that a team that finished 30 games over .500 would need to adjust its lineup and style of play to compete with a team that finished six-games under is silly, and it explains Vogel’s reluctance to alter either.  But just as the Pacers need to play with the abandon that comes by knowing they have nothing to lose tonight, Vogel needs to coach the same way.

Whether the season ends tonight in Atlanta or continues through the NBA Finals, this is one of the most interesting seasons an NBA team has ever played.  There have been splendid ups, torturous downs, rumors of bizarre internal issues, and a coming offseason of change.

Winning cures all, and Vogel’s professional ailments are no different.