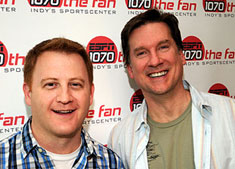 On the heels of a dominating performance in Washington, the Pacers have snatched back home court advantage from the upstart Wizards.  The Colts drafted two guys – an offensive lineman from Ohio State named Jack Mewhort, and Dante Moncrief, a wide receiver from Ole Miss.  The inaugural Grand Prix of Indianapolis will be run tomorrow at the Indianapolis Motor Speedway.

What better day to host a sportstalk radio show?  Fox 59’s Chris Hagan and I will be live from Pagoda Plaza at World’s Greatest Race Course for two hours of fun starting at 11a on 1070 the Fan, 107.5 FM, and 1070thefan.com.

IndyCar owner/driver Ed Carpenter will stop by to talk about the road course at Indy, and we hope to talk to Mewhort by phone.  We will definitely talk to Ohio State offensive line  coach Ed Warinner about a player that the Colts will undoubtedly rely heavily upon this season.  Position coaches are always the best source about a kid’s potential, so we are likely to learn something at 11:15a, when Warinner joins us.

There will be more, much more, about the butt whooping the Pacers put on the Wizards.  The 63-points scored by the Wizards was the lowest in franchise history.  Was it a matter of the Wizards being pathetic, or the Pacers defending exceptionally well?  Good question, and we’ll that some educated perspectives.

We’ll also have plenty of surprises, as is always the case when we venture out of the studio.

The weather is supposed to be spectacular, so if you are making it a day out at the track, please stop by the tent and say hello.  Hagan enjoys a break from listening to me yammer during breaks.