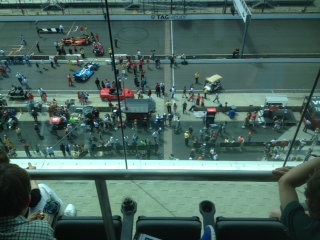 The people who were nervous prior to the standing start were proven to be prudent, not paranoid.

When the mayor of Indianapolis receives medical treatment because of an on-track mishap, corrective measures at the World’s Greatest Race Course need to be made.

The standing start was a cause for concern for the drivers before the race, and that concern was validated when pole sitter Sebastian Saavedra sat motionless as the green light signaled drivers to hit the throttle.  Several of the cars in line behind Saavedra avoided his stalled car, but those coming from the back with more distance to build speed were not so lucky.

Saavedera was punted twice, first by Carlos Munoz and then by Mikhail Aleshin who was rolling at 100+ miles per hour. Debris was strewn everywhere – one piece hitting Mayor Greg Ballard, who had just dropped the green flag.

The weather was beautiful, and the rest of the race was mostly safe and routine.  James Hinchcliffe suffered a concussion when more debris from another accident hit him in the head, but everyone else was treated at the scene and should be ready for practice – assuming their cars are.

Simon Pagenaud won the race, which served as a far better event to kick off the month of action than opening day ceremonies of the past, and the crowd looked much bigger than the estimated 40,000.  The mounds along the infield turns were filled, and what is normally referred to as the turn four grandstand had a crowd bigger than any I recall on a Pole Day since 1993.

There are always some kinks that need to be worked out when any event is run the first time, and the inaugural Grand Prix of Indianapolis is no different.  Somewhere in race control, it’s damn likely that more than one IndyCar or Hulman Family official scribbled, “NO MORE STANDING STARTS!” in a notebook.

As the debrief for May is held, there will be a brief discussion about the second GP of Indy, and the vote to abandon a started start will likely be unanimous.  Maybe at some point, the behavior of IndyCars and drivers will be predictable enough to allow the series to take a limited risk to provide excitement, but yesterday’s debacle should force the series to embrace safety over thrills.

There are many upgrades to the facility that are planned for the immediate future, and that is a good thing because the relics belonging in a museum were not restricted to the unbelievably cool car show that took place in Pagoda Plaza prior to the race.  The televisions in the media center and suites I visited are 4 X 3 standard definition sets that 90% of Americans won’t allow in their homes, and the giant video screens that allow fans to see the action in other areas of the track are almost completely useless.

It’s fun for dads to take a step back in time and describe to sons how things worked when they were young, but it shouldn’t happen at a place where the heritage is so closely intertwined with technological advancement.

The upgrades are coming, and the culture of cool being re-established by Hulman CEO Mark Miles – a guy whose track record of doing things right is unblemished.

Growing pains are to be expected, and yesterday’s botched start was no different.  Occasional mistakes, learning, and improvement will all be a big part of this May.  Yesterday brought fans a heavy dose of all three, and as long as Mayor Ballard can avoid another trip to the Infield Hospital, we’ll consider whatever else happens through the May 25th running of the Indianapolis 500 a success.

Despite the horrific start being the most talked about moment in the race, the day was a great showcase of speed and color that set a great tone for the rest of the month – certainly a hell of a lot better than the dull opening day pageantry in the past.