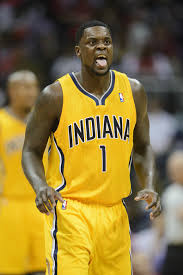 Lance Stephenson has been playing very well this series despite not being a focus of the offense. He selflessness is key for the Pacers success.

There are two possible consequence for the outcomes of tonight’s Pacers vs. Wizards Game Four showdown.  If the Pacers win, they will enjoy three opportunities to close out their latest overhyped foe on the way to the Eastern Conference Finals.  Or if the Pacers lose, a best two-out-of-three series begins Tuesday night in Bankers Life Fieldhouse.

Either way, Pacers fans are going to feel pretty good about the prospects of another two or three weeks of impossible to predict basketball from the most compelling team in the NBA.  They hoped for a split in DC after the Game One loss, and the Pacers banked that in Game Three.

It’s been said again and again that the Pacers appear to respond poorly to success, but the truth is that periods of prosperity have been so few and far between, predicting how they might battle tonight with a chance to go up 3-1 is a coin flip.

What might be more important is how the Wizards will come out while cornered.  This is the first postseason pressure they have felt in years, and have an opportunity to advance to the Eastern Conference Finals for the first time since Wes Unseld and Elgin Hayes led them there in 1979 – the same spring that current Pacers president Larry Bird took Indiana State to the NCAA Finals against Michigan State, and Michael Jordan was a sophomore in high school.

I could go on with bizarre explanations of prices and ages the last time the Wizards (Bullets) made any noise in the postseason, but the point is that this franchise has not achieved any success when it been under pressure like this in the lifetime of a majority of its players.

Pacers fans will hope for the continued re-emergence of center Roy Hibbert, who has put together very solid performances in games two & three.  Coach Frank Vogel doesn’t need brilliance from Hibbert – just functional productivity on both ends without silly fouls.

The Wizards would like to see some free throws drop in the basket rather than clank hard off the side of the rim.  After hitting 73.1% of their foul shots through the regular season, they have managed to make just 59.4% through the first three games in the series.  Worse, over the past two, the Wizards are hitting a Shaq-esque 16-33.

Game Four provides the Pacers a massive opportunity to put the Wizards in a hole from which they will have great difficulty climbing.  Needing to win three straight with two in Indianapolis is a very difficult challenge that will appear daunting to a very young team.

The Pacers are playing better and better, and there is no reason to believe that should stop.  Sports bar analysis that might also be accurate is that they may have been exhausted by a March in which they played 18 games – 11 of which were on the road.  The every other day schedule of the playoffs with limited travel has allowed the Pacers to recharge.

Fatigue is a bitch, and in basketball it cannot be overcome except through rest.  The Pacers appear rested and ready to take control of this series.

I don’t need to explain to Pacers fans why believing they are ready to exert their will and vanquish the Wizards is so dangerous.  The truth will be told starting in a couple of hours, and even though the murky waters of the Pacers future are beginning to clear, no moment can be safely predicted until either the Pacers or Wizards win their fourth game in this series.