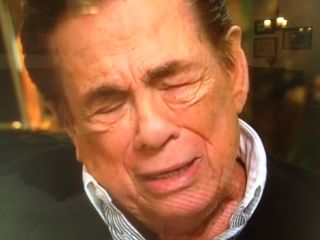 Clippers owner Donald Sterling issues one of the least effective apologies in the history of contrition.

[As I begin all posts about this cretin who shares my last name, you are reminded that Donald Sterling’s last name before he changed it was Tokowitz.  He is not related in any way, shape, or form to me or my family.]

A racist tag is applied in permanent ink, and no amount of apologies from a man like banned-for-like Los Angeles Clippers owner Donald Sterling is going to scrub it clean or fade it.

In America, murderers are paroled and forgiven by the families of victims, but racists are never allowed the ability to rehabilitate.  The stigma of such ignorance never leaves because we believe a brain that takes a set of facts and combines them into racial stereotypes can never be trusted to not do behave that way.

Sterling is an entitled wing nut who has been so thoroughly programmed to listen to and obey only himself that his reputation – which sucked prior to the release of recordings exposing his idiocy – can never be reclaimed.

That won’t keep him from petulantly trying to hang on to the Clippers through the media and the courts, and his indifference to public opinion will likely result in a disruption four-and-a-half months from now when the Clippers and other NBA teams are scheduled to report for training camp.

His “apology” included a plea that the owners give him another chance, which speaks to the lack of proximity Sterling’s mental state has with reality.  The SS Sterling has pulled from the port, been torpedoed, and now lies wedged in a crevasse at the bottom of an ocean so deep light doesn’t reach it.  Yet, there he is standing on the bow of his boat pleading for rescue from a group that loathes him.

A reasonable human being realizes when a game ends.  Helping wounds heal is the appropriate response to awful circumstances, but remember that Sterling made his bones as a divorce and personal injury attorney.  His wealth has been garnered through the loving embrace of miserable behavior, and he’s not going to grow a conscience in a week, month, or ever.

This story is going to drag on because Sterling knows that the longer he can hang on as the owner, the more unpleasant it becomes for the NBA, and making something unpleasant disappear is worth money to rich people.  Sterling will leverage the hideous unpleasantness his buffoonish comments have caused into a lot of money.

There is no gain for surrender, and thus Sterling will go down kicking and screaming.

3 thoughts on “Donald Sterling apology too little, too late, and too odd”