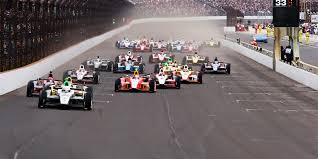 This is the fun part of the month of May at the IMS. Getting there is half the fun, but knowing what is going on this Saturday and Sunday requires a little reading.

When it comes to figuring out what’s going on this weekend at the Indianapolis Motor Speedway, don’t be a dumbass like I was until an hour ago.

In this morning’s Breakfast with Kent, I blathered on about the weather a bit, and closed by saying people in central Indiana should head to the Indianapolis Motor Speedway on Saturday for Pole Day.

For a very long time, the pole was awarded to the fastest car on the first Saturday of qualifications.  This year, as I was reminded by the great Sam Rogian, pole position is now on earned on Sunday.  What happens on Saturday?  Good question.

Here is how the qualification format will operate this year:

All entries are guaranteed one qualifying attempt.  At the conclusion of those attempts, positions 31-33 are provisional and those cars, plus any entry not in the field that has declared its intent to qualify, will participate in a separate qualification session Sunday, May 18 to determine the 11th row.

Multiple attempts are permitted without withdrawing a previous time.

Saturday qualifying times are erased and entries that did not transfer to the Fast Nine Shootout must make another four-lap qualifying attempt to determine their starting position.  Group one determines starting positions 10-30, and Group Two 31-33.  If there are only 33 entries, the two groups will be combined.  Each entry is guaranteed one attempt, with order based on slowest to fastest from Saturday qualifying.

The Fast Nine must make one more four-lap qualifying attempt in the order of slowest to fastest to determine starting position including the pole.

Let’s break this down into its important parts – Saturday only separates the field into three groups – the Fast Nine, positions 10-30, and positions 31-33, but if there are only 33 cars, it’s separated into two – Fast Nine and the rest.

Sunday is where the field runs for starting position.

The question is now the same as it has always been, why is this system so complicated?  Well, the Indianapolis Motor Speedway would like fans to come out to the “World’s Greatest Race Course” as many times as possible, rather than just once.

Not too many years ago, the quals format needlessly covered four days.  Now, it’s two.  While the two-day format is half as silly as the four-day format, it is still twice as long as is logically needed to determine which cars will start where.

The only Saturday drama will be in which cars are in the top nine, and which are 10th-and-slower.

At some point, the inertia that prevents a concentrated and dramatic format for qualifications will wane, and logic will finally prevail at 16th and Georgetown.  At least we can hope it happens.

If I forgot about the change in format, you can bet thousands of others will show up Saturday with a cooler of beer and sandwiches ready to watch Pole Day as it existed for the past few years with the Fast Nine shootout at the end of the day.  They are going to leave wondering just what the hell they saw.

On Sunday, the traditional Bump Day that featured very few if any bumps from the field over the past few years, fans will see something that qualifies as interesting.  Not sure why anyone – other than car owners – would be transfixed by the Group One battle for positions 10-33.  The run among the Fast Nine should be reasonably compelling.

What goes on at the Indianapolis Motor Speedway between the Grand Prix of Indianapolis and the Indy 500 could be squeezed very comfortably into three or four days from Thursday through Sunday of Memorial Day Weekend, but that would reduce revenue generation opportunities.  Offering up ideas to make less money, even in the name of common sense, are not welcomed in many conference rooms.

The smart people at the IMS know that building a better, less complicated, more fan-friendly mouse trap would be very simple, but it’s going to take some odd evolutions to finally get to where a concentrated weekend of action is what is enacted.  People in charge will have to be convinced that more money will pour in over less days to get that done.

In the meantime, make sure you know what you will see on Saturday and Sunday – a full week prior to the Greatest Spectacle in Racing.