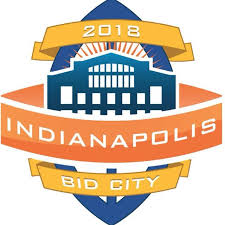 So the future of the Indianapolis bid to host Super Bowl LII rests in the performance of Indiana Sports Corp President Allison Melangton and former Colts All-Pro center Jeff Saturday.

They have an uphill battle against New Orleans and a new stadium in Minneapolis, but perhaps the positive memory of what many in the media have called the best Super Bowl venue in the history of the event can trump New Orleans perfect 9-for-9 record in winning the right to host a Super Bowl every time it has been nominated.

The presentations will take place tomorrow afternoon with the vote immediately following.  As I understand it, the first vote will eliminate one of the three cities, and then another vote will be held among the two finalists.

Educated money is on New Orleans, but the phrase that is often used to describe Melangton is “secret weapon.”

There is no doubt that Indianapolis is not only specifically qualified to host a giant event like the Super Bowl, over the last half-century it has been rebuilt for just that purpose.  Just over 27 months ago, Indy delivered an all-time great.  The NFL should trust it with its signature event again.

And here are the points of emphasis released by the Indiana Sports Corp this morning:

Indy’s Money is in the Bank: Indianapolis is the only Bid Committee that has pre-funded 100% of its Host Committee operations with secured, confirmed commitments from private companies and individuals prior to its bid presentation to host the event. This is the third time Indy has used this as a strategy in the bid process (2011, 2012 and 2018). Approximately $30 million has been raised for the 2018 effort. This removes any financial risk for the NFL regarding Host Committee expenses, and would allow Indianapolis to focus on planning the event – and not fundraising – on day one of securing the right to host the 2018 game. This level of commitment from the Indiana corporate community is unprecedented in any other community in the country, and showcases the generosity and vision that has made Indianapolis the leading sports city in the country.

An Exceptional Stage to Crown a Champion: Lucas Oil Stadium performed exceptionally well as the host of Super Bowl XLVI. The stadium has been ranked as the nation’s top stadium for fan experience the past three years by Stadium Journey, which travels the country reviewing facilities. Lucas Oil Stadium remains state-of-the-art, and continues to receive national acclaim and high marks from the NFL and its partners, visiting teams, broadcasters, media members, and fans. While Indy promises to make hosting the Super Bowl “More Than a Game”, the most important part of hosting the Super Bowl is providing the perfect stage to play the world’s marquee sporting event, and Lucas Oil stadium has proven to be that perfect stage.

Indy Created the First Urban Super Bowl Celebration and 2018 will be Even Better: As part of Indy’s bid to host the 2012 Super Bowl, Indianapolis presented a concept that became known as Super Bowl Village. Over 10 days leading up to Super Bowl XLVI, more than 1.1 million fans joined the football celebration in the Super Bowl Village. Located in close proximity to Lucas Oil Stadium and the Indiana Convention Center (which housed the NFL Experience and drew an NFL- record 265,000 fans), the Village included concerts, interactives, family programming, games, food and drink, and a zipline that became the talk of the sporting world. The 2018 bid now includes a requirement for a Host Committee to provide a Super Bowl Boulevard, and Indianapolis’ bid includes an expansion of the celebration to include Monument Circle, and a multimedia show utilizing advanced digital technology, laser building projections, fireworks, and concerts. This provides a progressive and dynamic interactive experience, elevating the standard for fan entertainment once again. The NFL brand will be the only brand in the spotlight, and it will dominate the landscape.

“More Than a Game”: Indiana has built a sports history on leveraging hosting sports events to do great things for youth, residents, and organizations for the betterment of the community. Indianapolis has prioritized legacy projects with all major sporting events hosted in the city since the inception of Indiana Sports Corp in 1979. Our vision has always been to make it “More Than a Game”. It has been reported countless times that Indianapolis executed the most impactful legacy initiatives in Super Bowl history in conjunction with Super Bowl XLVI. It truly revitalized the Near Eastside of Indianapolis. As in 2012, the Legacy Initiative for Super Bowl LII will be multi-faceted.

No community is home to more national sports resources and organizations than Indianapolis. Partnering with Indianapolis-based USA Football, as well as the NCAA, National Federation of High School Athletic Associations, and the American College of Sports Medicine (all based in Indianapolis) among others, the Indiana legacy initiative is a commitment to a better and safer game of football by maximizing the sports resources and expertise only located in Indiana. Delivering important standards to youth and high school football would benefit our young athletes and address concerns that contribute to a participation decline. The Legacy Initiative answers these challenges through a partnership with USA Football and its Heads Up Football® program through collaboration, innovation, funding, teaching, intellectual resources, research, and facilities. Our Legacy will not be a single concept, as the initiative also focuses on the important needs of the community and will support neighborhood development and residents, as well as programs that will serve our youth and others for generations to come.

My guess is that despite being a more than worthy choice, Indianapolis finishes second to New Orleans, which will celebrate its 300th anniversary in that year.  It’s tough to beat New Orleans during a normal year.  Factor in the continued empathy for the Hurricane Katrina ravaged area and the anniversary, and it might be too tall a hill to climb – even for people as talented and compelling as Melangton and Saturday.