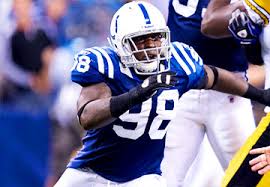 Robert Mathis has been suspended by the MFL for trying to turn his sperm into rampaging beasts who seek an eggs just as he hunts quarterbacks.

Indianapolis Colts all-time sacks lead Robert Mathis used Clomid under a doctor’s supervision to try to get his boys to swim stronger and truer, his wife became pregnant, and in a ridiculous overreach by the NFL he has been suspended for the first four games of the 2014 season.

And a lot of people think it’s fair because players understand – or should understand – the rules and potential consequences concerning PEDs.  The intent and advantage gained in their use is meaningless to the NFL and to those evaluating the use of their terrible swift sword.

What happened to the disdain for authority that used to be a hallmark of Americans?  When did we decide to embrace the notion that pedantic buffoons enforcing rules are reasonable men?  Doesn’t anyone remember Nixon?

Mathis and his wife wanted to have a another baby prior to the ultimate toll being exacted on his mother, who is bravely fighting stage four esophageal cancer.  For that, he earns a four-game rip, and people applaud because the rule and consequence are clear.

A lack of gray area makes for lousy justice, and that’s where the NFL is in enforcing its rules on PED use, but that’s not the sentiment being expressed by the media or fans.

“He should have known better!” is the overwhelming opinion, and it reflects a miserable acquiescence to guys wearing fancy suits and using law school words to espouse wrongheadedness.

Without examining intent and advantage gained, there can be no justice.  Grabbing our ankles and allowing authority figures to operate without a serious level of skepticism is a terrible crime, especially for the young who are unencumbered by giant bills and responsibilities for others that tend to turn men into yammering pussies.

It is their societal requirement to stand up, make a fist, and demand reason, but what we are getting from these pests is noting more than blind acquiescence.  Even in the mostly anonymous world of social media, I am being shouted down by those youthful line-toers who refuse to question the supremacy of those who have been trusted to wield power.

While the bottom line is that Mathis should be allowed to play, the more troubling issue is that twenty-somethings are allowing idiots in their 50s, 60s, and 70s do whatever the hell they like without the possible consequence that can only be brought to bear by the young and angry.

When the young have only respect for authority, a society is doomed.