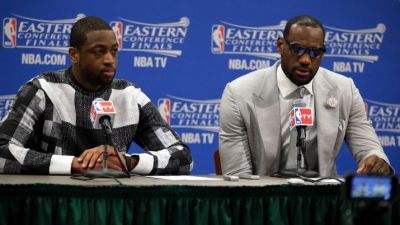 Dwyane Wade and LeBron James understand what they did wrong yesterday, and are not like to repeat those mistakes.

The potential for the Pacers to suffer a down is high tomorrow night.  The Heat didn’t win back-to-back championships by not knowing how to respond to adversity.

Paul George and the Pacers should expect a much more frenetic defensive effort from the Heat tomorrow night.  Yesterday, the Heat embarrassed themselves by going through the motions on the defensive end, and that is not going to happen two games in a row.

Because going down 2-0 is not an option for a team intent on winning a third straight title, LeBron James is going to dig deep are lift the level of the Heat’s effort through his example.  If the Pacers can manage a win, the Heat will need to win four-of-five games to advance to the NBA Finals – two of which will be at Bankers Life Fieldhouse.

In order to be competitive in Game Two, the Pacers are going to have to raise the level of their game.  Yesterday’s execution and truculence was good enough to beat a lethargic Heat squad, but that isn’t going to cut it when the Heat’s backs are against a wall.

Free throws will be the key.  The team that gets to the line more often are almost always the team that attacks more, and that was certainly the case in the first game as the Pacers attempted 22 more foul shots and making 19.

The Pacers have been on a wild emotional ride this season – playing exceptionally well in compiling a 46-13 record before limping to the finish line with a 10-13 record in their last 22 games.  The playoffs were no different as the Pacers faced elimination twice against the subpar Atlanta Hawks, and then vanquishing the Washington Wizards in six.

Sadly, the Heat are not plagued by the same problems that cost the Hawks and Wizards a chance to send the Pacers on that long dirt nap of an early offseason.  The Pacers came through because of the leadership of David West and a recent history of success.  Neither the Hawks not Wizards had West nor a track record.  The Heat trump the Pacers success, and their leader may not have West’s ability to communicate with a scowl, but he does have the game – and then some.

In their 14 playoff games so far in 2014, the Pacers have been to the line the same or more times than its opponents nine times.  In those games, they have posted an 8-1 record.  In the remaining five games when the Pacers had fewer free throw attempts, they are 1-4.

It’s not the points gained at the line that cause the difference between winning and losing, but the advantage in aggression that getting to the line more often requires.

Yesterday’s +22 free throw differential for the Pacers was a high water mark for this postseason.

Interestingly, free throw differential was not meaningful in the 2013 Eastern Conference Finals between these same two teams.  When the Heat won that specific statistical battle, they were 2-2.  When the Pacers won, they were 1-2.

For only the third time in the regular season or playoffs, the Heat failed to lead at any point in a game.  You can bet that will not be repeated tomorrow night.

The Pacers are going to have to fight like hell, attack the rim, and take better care of the ball for 48 minutes to maintain home court advantage heading to Miami for games three and four.