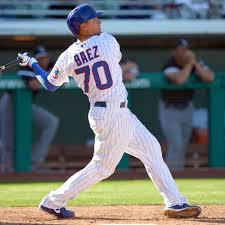 The future of top prospect Javy Baez is now being trusted to disgraced former all-star Manny Ramirez. Why? Because we all deserve a second chance. Huh?

For a bad team on track to lose nearly 100 games for the fourth season in a row, the Chicago Cubs sure don’t mind inviting criticism in new and creative ways.

Cubs president Theo Epstein announced the signing of 41-year old former major leaguer Manny Ramirez to a minor league contract as a player/coach for the iowa Cubs.  He is hoped to be a mentor for the young prospects the Cubs are counting on to be the foundation of the relaunch of the world’s least successful franchise.

It’s not exactly hiring Richard Speck to be the dean of nursing, but other than his estimable talent to drive any pitch at any time out of the ballpark, there was nothing in Ramirez’ behavior during a 19-year MLB career with five teams that hinted toward a second career as a mentor.

Epstein claims their is no chance for him to earn a promotion to the big league club, and that he will not take important at-bats from prospects.  That’s a curious position in that every at-bat in Iowa should be important for a prospect, and if Ramirez hits .422 with 12 home runs in June, why the hell wouldn’t he be promoted?

The reason for the hire, according to Epstein, is redemption, “I think Manny deserves a second chance because humans deserve second chances. I believe in redemption. It’s a human trait to make mistakes and we should judge people by how they respond. The Cubs giving Manny a second chance will benefit our young hitters and player development.”

This signing comes immediately on the heels of the release of a thoroughly insulting and foolish video with owner Tom Ricketts deriding his own facility, making a big show of mocking the clubhouse batting tee the Cubs use to warm up prior to pinch hitting.  It was as though the construction of a batting cage is itself prohibited by the looney contract with the rooftop owners.

The video immediately followed the painting of the red marquee sign that is the most iconic image seen from the outside of Wrigley Field.  It was painted green to honor the original color scheme.  Harmless?  Sure, but moronic.

Despite their willingness to employ a two-time PED suspendee, the Cubs refuse to even acknowledge the existence of all-time team leader in home runs.  Sure, he was a selfish pain in the ass, and likely used PEDs.  We know he used a corked bat.  The Cubs refused to invite Sosa to a ceremony celebrating the 100th anniversary of Wrigley Field, but they pay Ramirez to teach a game he sullied to young players.

I am in no way a champion of Sosa’s.  He was strange, self-immersed, and a cheat.  Baseball rejected him, and the Cubs should continue to ignore his legacy – likely built through chemistry.

Epstein should spend less time helping former players find redemption, and more time making the Cubs a 70-win team.  If Epstein is the smartest guy in the offices at Clark and Addison, the rest of the guys in the room must not be too bright.