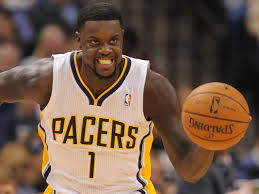 Lance Stephenson is going to sign for a significant raise in this offseason. Whether it is with the Indiana Pacers or somewhere else is the question.

The 2013-2014 season isn’t over yet for the Indiana Pacers, but the odds of a trip to the NBA Finals grew long as the buzzer sounded following the Heat’s 102-90 victory in Game Four.

Coming back from the 3-1 deficit the Pacers currently face is a tough putt.  In the 222 times in NBA history teams have taken a 3-1 advantage, 214 have managed to win one of the final three to advance to the next round or win the championship.  That 96.4% success rate is difficult to ignore, especially when the Heat’s previous wins have been less than dramatic.

Talking about how this team will evolve forward is a little premature, but certainly relevant as the Pacers return home for what might be a swan song of a group that has experienced great highs, terrible lows, and everything in between.

There is a book to be written about this edition of the Indiana Pacers, but the person who decides to revisit the preseason trip to Asia, the 33-7 start, the diverted flight and broken bus to San Antonio, signing of Andrew Bynum, trade of Danny Granger, roller coaster second half, and maddening postseason will earn his or her money.

That book might be to the author what “Season in Hell” was for Eddie and the Cruisers – a journey from which a complete psychological recovery might not be possible.  The author might not fake his own death like Eddie Wilson did in the mid-1980s HBO favorite, but a toll will be taken.

If past is prologue, a look at the changes that came after the 2013 seven-game failure against the Miami Heat might provide a peak at what lies ahead as Pacers president Larry Bird re-tools the roster for 2014-2015.  The core stayed the same, but virtually everyone else was jettisoned.

Every non-starter but Ian Mahimni was gone by this season’s trade deadline.  Among them were Tyler and Ben Hansbrough, Gerald Green, D.J. Augustine, Danny Granger, Orlando Johnson, Sam Young, Miles Plumlee, and others.  Many were free agents, and others were traded or cut.

This offseason will provide the challenge of Paul George accounting for an additional $12.5 million against the cap.  His salary will jump from $3,282,003 to $15,800,000.  Including the George bump in pay, Bird has already spent $65,708,778 of the $77 million luxury tax threshold above which he says the Pacers cannot spend.

The most compelling question of the offseason is whether Stephenson can be signed, and whether the Pacers would choose to.  Stephenson is a really interesting player.  Mercurial in behavior on and off the court, Stephenson is just 23, and has a level of brashness and competitive fire that is unmatched on the roster.

Stephenson is also a bit of a loose cannon who will come with a price tag approaching $10-million per year.  His upside is huge, and his downside is hard to ignore as well.  What isn’t unknown is that the Pacers will have no more than a few shekels to throw around if they ink Stephenson.  A lack of a first round draft pick helps a little bit, but filling the roster while staying under the magic $77 million mark without dealing some current salary will be difficult if not impossible.

The Pacers are the second best team in the Eastern Conference, the two-time Central Division Champions, and their best player is entering his prime.  That’s a spot many teams envy, but is it reasonable to expect a different result for the Pacers if the Heat stay together.  LeBron James, Dwyane Wade, and Chris Bosh have player options worth more than $20 million apiece after both this season and next.

If they choose to become free agents, the Pacers become odds on favorites to inherit the Heat’s throne as beasts of the East if they retain their core, including Stephenson.  If Stephenson is allowed (or chooses) to leave, Bird will have a little cash to play with, but not enough to make a splashy move.

When Bird announced the resigning of David West, he pointed to Stephenson who was standing behind the media and said that next year it would be his turn.  Bird is usually pretty certain of what he wants, and he has been a champion of Stephenson since he drafted him 40th in 2010.

And we haven’t even mentioned the possibility that Frank Vogel might not be retained.  To beat the Heat as they are currently built, something with the Pacers need to change, and it’s up to Bird to decide whether Vogel’s leadership is taking the Pacers closer to their potential than another coach might.

Should be a fascinating offseason, and it might be 36 hours from beginning.