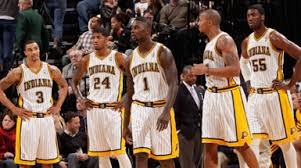 The Pacers starting five might return intact next year, but you never know.

Whether the Indiana Pacers win or lose tonight’s Game Five, fans at Bankers Life Fieldhouse should take the time to do two things – enjoy watching this group play together, and thank them for the total body of work they cobbled together during a weird, weird year.

The Pacers face long odds to move on to the NBA Finals, needing to beat the two-time defending champions three straight times to win the Eastern Conference Finals.  In the 222 circumstances in NBA history when a team has taken a 3-1 series lead, that team has gone on to win the series 214 times.

In those instances when the team with the 3-1 lead was a two-time NBA champ, if it has ever happened, I will bet that team won the series every single time.

So let’s prepare for the logical conclusion to this series, hope for a miracle, and adjust behavior accordingly.

Win or lose tonight, Game Five is likely the final home game of this roller coaster season for the Pacers, and despite the incredible expectations the Pacers built through the first half of the season, they are more than worthy of a significant display of appreciation.

Focusing on the recent struggles that have plagued the Pacers would be short-sighted and a Philadelphia-ish response to adversity.  In NBA seasons, 29 teams go home losers.  One becomes the champion.  To show displeasure with a team that fought like the Pacers did would represent a level of discomforting level of petulance for a city known for being filled with nice people.

Next year’s roster is likely going to look much different than this one.  Lance Stephenson will be a free agent, and if the Pacers are willing to commit the resources to sign him, there are bench players who will need to be dealt in order to free up money for Lance and the rest of the roster.

There is a possibility that Pacers brain trust Larry Bird, Kevin Pritchard, and Donnie Walsh will look at the bizarre second half of the season and sad end against the Heat (if that becomes the outcome), and realize that beating LeBron and company with this group is impossible.  No one other than Paul George would be safe – including coach Frank Vogel.

My belief is that Vogel represents the type of leader that is most effective.  His consistency reflects trust, and his players turning the two opening series around showed reciprocity.

The unhappy truth is that it’s likely no one in the Eastern Conference will compete successfully with the Heat as long as LeBron James and Dwyane Wade are healthy and productive.

All the roster shuffling Bird might do in the offseason will pale in comparison to the importance to the Pacers of 24-year old Paul George’s maturity as a man and basketball player.  George needs to build himself into a champion in mind and body if the Pacers are ever going to climb Mt. LeBron.

In the meantime, the level of work this team has done since the end of Game Seven in the 2013 Eastern Conference should be acknowledged.  It’s not a matter of applauding a failure to beat the Heat, but a tip of the hat for effort that sadly did not yield the hoped for result.

The series isn’t over, but the chances of the Heat dropping tonight’s game in Indy and Friday’s in Miami are slim given the level at which both the Heat and Pacers have competed.  If the Pacers couldn’t find the grit to attack the Heat defense effectively in games three and four, how can they be expected to do it in games five and six?

Fans should hope for the best tonight at Bankers Life Fieldhouse.  They should lose their minds and voices in trying to lift the Pacers up, but when the game ends – win or lose – shower some love upon these guys.  This is almost certainly  the last time they’ll play together as a team in their home town.

Good guys playing hard come up short.  That’s life.  And if the Pacers come up short in either games five or six, that makes them no less worthy of some love tonight.

2 thoughts on “Indiana Pacers – Enjoy tonight’s Game Five, regardless of the outcome”