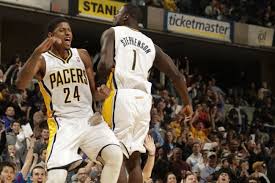 Paul George and Lance Stephenson could be the foundation of the first NBA champions in Indiana Pacers history.

There is a reason that Michael Jordan and Isiah Thomas didn’t win an NBA Championship until each turned 28.

It’s the same reason LeBron James didn’t win one until he was 27, and Wilt Chamberlain won his first at 31.

Winning occurs as athletic mastery and behavioral maturity intersect, and regardless of how much we like Paul George (24) and Lance Stephenson (23), they have done little to prove they are psychologically ready to challenge James and the Miami Heat.

Between Stephenson’s strange thoughts on how James showed weakness through his trash talk and Paul George’s erroneous assertions about the effect officiating had in Game Four, neither has shown the mettle required to measure up to the two-time defending champions.

Pacers center Roy Hibbert (27) hasn’t been a showcase of maturity himself with four scoreless games in the 2014 postseason, including Game Four in Miami.

An NBA season is like a centrifuge that spins until elements that don’t cling to each other in the middle are spun toward the edges, and the farther out they go, the more difficult it is to return to the middle.  In late January, a few of the pieces let loose of one another, and have never returned.

Whether that was caused by internal strife, salary disparity, personal demons, silly choices, moves by the front office, some other nefarious change agent, or an unholy combination can only be answered by the Pacers themselves.  All would likely come up with unique answers.

The question moving into the offseason, whenever that day comes, is whether the Pacers core is capable of coming back together to hold each other close enough to resist the pull to the edges where teams go to collapse.  Have the Pacers learned enough to be successful moving forward, or do they need to be reconstituted in a way that will give the Pacers a better chance to beat the Heat in 2015 should the Big Two + Chris Bosh remain together?

Selfies, strippers, trash talk, bitching and moaning about referees, carping about the game plan, airing dirty laundry about selfishness in the media, and overreacting to personnel moves are team killers, and if the Pacers haven’t learned that lesson this season, they never will.

It’s not essential for teammates to love one another, but uniform belief in a common goal is an absolute must, and throughout the second half of the season and postseason, the Pacers looked like anything but a group with a common purpose.

Stephenson will be rich beyond his dreams beginning next year, but the millions of dollars difference between compensation and production is certainly noticed by Stephenson.  And he knows damn well he will never be able to lay claim to those wages lost.

There are exceptions to the age needed to succeed rule.  Larry Bird won his first ring as the Celtics best player at 24, and Magic Johnson won his first as a 20-year old rookie.  Some would argue that Magic was not the best player on the Lakers while Kareem Abdul-Jabbar was in his prime, but Bird was the Celtics best from the moment he put on that iconic jersey.  The Pacers didn’t draft George and Stephenson in 2010 because of their ability to win young, so expectations have been fulfilled.

What Bird needs to see is steady improvement.  Fame and wealth make screwy choices difficult to avoid, as the Pacers have shown since late January.

The future is bright for both George and Stephenson if they are able to take responsibility for the errors of this season and apply that information toward 2014-2015.  Being four years behind Jordan with two trips to the Eastern Conference Finals is not a bad spot to be in.  The first four years of their careers have shown potential and revealed flaws.

Sand off the rough spots and NBA titles could be in their future.  If the mistakes continue to recur without correction, the Pacers as currently built are as good as they will get.