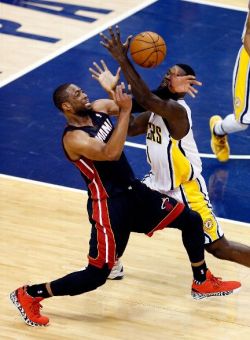 Lance Stephenson strips Dwyane Wade as the Pacers turn up the defensive pressure in 93-90 win.

When LeBron James is inducted into the Basketball Hall of Fame, all recorded traces of the Pacers Game Five win tonight over his Heat will be destroyed as a favor to his legacy.

Seven points, two rebounds, four assists, and five fouls do not comprise the line the Heat needed from the best basketball in the world to close out this series.  He is not likely to repeat it.  But Rashard Lewis isn’t likely to knock down six three-pointers in Game Six either.

So this wacky and occasionally wonderful Pacers season rolls toward yet another completely unpredictable chapter, and the Pacers are 48 minutes away from being exactly where they wanted to be when this madness started five games ago – Game Seven at Bankers Life Fieldhouse.

Paul George scored a remarkable 31 points in the second half, but it was the frenetic energy of Lance Stephenson that picked the Pacers mojo up off the floor and dusted it off.  His defensive pestering and poking changed the tempo of the game, and the Heat buckled without James on the floor for exactly half the game’s 48 minutes.

Still, the Heat had a chance to tie or take the lead down 92-90 with under 10-seconds left as James got a shoulder into George and drove to the what appeared to be a game tying layup, or a foul that might put him on the line for game tying free throws.  But as happens too often for a great player, James passed to Chris Bosh in the corner for a three-pointer to win it.  Bosh missed, and the game was over shortly thereafter.

The Pacers suffered through and ultimately survived one of its worst quarters of the season as they were outscored 26-11 in the second despite James and Wade spending a lot of time on the bench and never being on the court at the same time.  Ray Allen turned back the clock and scored 10 points to lead the Heat in what looked to be a deciding period while defending better than a 38-year old has a right to ask his body to.

At the end of the half, the Heat led by 11 points and appeared to be on their way to a stress-free ticket punch to the NBA Finals, but the Pacers had some fight left and refused to accept their demise without one more surge.

The third quarter was as good for the Pacers as the second was for the Heat, as they outscored the Heat 31-16.

The yo-yo disposition of this wacky Pacers game was in full flower tonight, showing both the laconic malaise that has baffled players, coaches, media, fans, and anyone else who has dared expect any level of play from this team.  Those who had the temerity to predict a World Championship after the 33-7 start to the season or doom after any of a couple of dozen occasions during the last two months of the regular season or entire offseason have been stunned by the opposite.

High quality energetic play flashes periodically only to be replaced by slow motion mopery – and vice versa – but because there was slightly more great than terrible tonight, the Pacers will board a plane to Miami tomorrow for its one shot to force a home Game Seven.

James will be well-rested and likely much improved, while Lewis can’t be close to what he was tonight.  George will be asked to prove tonight’s 37 point and six steal performance wasn’t a fluke.  Roy Hibbert will need to come up with another quiet double-double (10 and 12) for the Pacers to defy the odds and bring the series back home for a second winner-goes-to-the-finals 48 minute grudge match in two years.

Again and again, the Pacers find a way to extend their season, and tonight might have been the most stunning.  A Game Six upset would trump tonight’s win 10 fold.

Can’t wait to see what the Pacers have in store for Friday night.