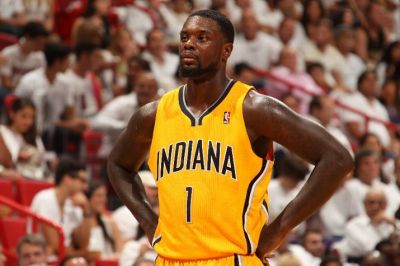 Lance Stephenson not only saw his season end tonight, but with it a few million dollars in future earnings may have been squandered.

For several brief moments there was hope, but it flew out the window and vanished with stunning speed.  Trailing a few minutes later by a 13-9 score, I told the people I was with that the Heat would get to 30 points before the Pacers got to 20.  My new glasses really have made me smarter.

The Heat scored at will and the Pacers didn’t as the Heat closed the first quarter on a 22-4 run and the first half on an even more astounding 58-25 blitzkrieg.

It was a painful night for the Pacers fans, and I’m sure it was worse for the team, but it sure didn’t look like it.  The demeanor of the team never changed appreciably throughout the game – which means either that the Pacers are tremendous professionals, or they knew the jig was up from jump street.

The strange malaise the Pacers have been able to overcome sporadically since the halcyon days four months ago when they were the toast of the NBA with a 33-7 record hung over the team throughout what I assumed was the biggest ass kicking of the season.  I was wrong.  Twice the Pacers were beaten by 26 – once against the Houston Rockets and again by the San Antonio Spurs.

That embarrassment is what a wacky banked three-pointer at the buzzer by Donald Sloane saved the Pacers from.

For the fourth time in these playoffs, the Pacers tied a franchise record for fewest offensive rebounds in a game (four), which must be a record in and of itself.

If I told you before the game that the Pacers would outscore the Heat 10-4 in fast break points, would go to the free throw line four more times than the Heat, would shoot 46.4% from the field, would turn the ball over only 11 times, and LeBron James and Dwyane Wade would only combine for 38 points, you might think the Pacers would be in control of the game.  Not if I included the Heat shot an astonishing 57.9% from the field.

The easily understood fact that became quite clear tonight is that the Heat are the better team.  Last year, that was in doubt, even after the Game Seven debacle in Miami that looked a whole lot like this mess.  But tonight, it was hard to imagine this group of Pacers beating that group from the Heat – ever.

Fortunately, the Heat might splinter off as James, Wade, and Chris Bosh (Batman, Robin, and Alfred) all have the ability to opt out of their contracts for 2014-2015.  With all three being paid $20M next year and a chance to four-peat if they can get past whoever emerges from the West, I can’t imagine why they would, so that seems less fortunate now than it did when I started that paragraph.

The Pacers have virtually all major contributors under contract for next season other than Lance Stephenson, so the talk during the offseason will focus on whether the Pacers will re-sign their mercurial young guard.  His line tonight was an ordinary 11 points, four boards, and one assist, but his behavior was anything but.

Rubbing James’ face was odd, but slapping Norris Cole in the head was unforgivable.  I’m a big proponent of bruising play.  Making a guy pay a physical toll for entering the paint is part of the game, but smacking a defenseless player in the head while he reaches for a loose ball is beyond even my very loose boundaries.

It could easily have been called a flagrant two, which would have resulted in Stephenson’s ejection, and if I were an NBA GM, that moment combined with so many others would give me great pause as to whether I wanted to invest a bunch of cash and energy in him.

For a guy with millions on the line, Stephenson played like he was allergic to wealth.

Team president Larry Bird has several decisions to make.  The first is whether he believes this team as currently constituted can mature enough to challenge the Heat.  The second is about the potential return of Stephenson.  The third is about Frank Vogel.  Blaming coaches for the woes of the world has become standard fare among fans and front offices.  We’ll see whether Bird believes Vogel has earned a fourth full season – a season during which he would become the longest tenured coach in the Pacers NBA history.

For a night when the fate of the Pacers season was definitively answered, there sure are a lot of questions left to ponder.

One thought on “Indiana Pacers start fast, but fade even faster in 117-92 series ending loss to Miami Heat”