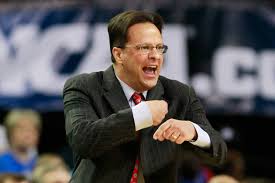 Tom Crean – not among the best 50 coaches in college basketball?

There are some Indiana fans who remain unsold on the coaching acumen of Tom Crean, and after last season’s woes Purdue fans are losing a little patience with Matt Painter.  But very few could name 50 coaches better than both.

Yesterday, ESPN released coaches #25-#50, and it will continue to reveal one per day for the next five weeks.  The rankings were generated through surveying nearly 100 ESPN college basketball experts (writers, editors, broadcasters and researchers).  They were asked to rate college basketball coaches on all aspects of running a program on a scale of 1-10.  The points were tabulated, and Indiana’s Tom Crean and Purdue’s Matt Painter were on the outside looking in.

Ahead of them were seven Big Ten coaches, including Minnesota’s Richard Pitino (#49) – who has been a head basketball coach for all of one season, Bob Hoffman (#47) of Mercer – with one signature win over Duke in his career, and the perpetually addled Bruce Webber (#40) of Kansas State.

Fran McCaffery at Iowa and Tim Miles at Nebraska rank #33 and #32 respectively.  Because the top 24 will be shown one per day, we are left to speculate that Tom Izzo, Thad Matta, John Beilein, and Bo Ryan will round out the other Big Ten coaches included in this list that ESPN purports to celebrate the present and ignores legacy.

Legacy is one thing, but to omit Crean who 16 months ago was the coach of the #1 team in the country with two players that would be top four selections in the 2013 NBA Draft says something about ability to recruit a kid like Cody Zeller, and develop another like Victor Oladipo.

Matt Painter resuscitated a moribund Purdue program to lead it back to relevance through 2012.  The recruitment and development of JaJuan Johnson, Robbie Hummel, and E’Twaun Moore displayed exactly the capabilities of Painter as a coach and leader.

And somehow, Richard Pitino ranks ahead of both with a team that won the 2014 NIT and has one recruiting class under his belt.  What the hell kind of craziness is this?

This list represents the silliest of all journalistic contrivances.  I would expect this level of boobery from the occasionally insipid musings of Bleacher Report-esque flash card lists of top 15 this and top 20 that.  ESPN owes users more than that.

Whether Crean and Painter are entering the twilight of their careers at Indiana and Purdue is a question to be answered in 2014-2015, but to seed them outside the top 50 of current coaches is insanity regardless of the methodology.

Both have flaws.  Since that great 2007 recruiting class, talent has dwindled in West Lafayette, and the enormous expectations in Bloomington have rarely been satisfied.  Sure, there have been moments of grace with wins over outstanding teams, but two Sweet Sixteens each did not measure up to dreams of the fans.

But when have exceeding expectations or accumulating great talent been a consistent part of the Mike Brey era at Notre Dame?  He ranked #45 – a minimum of five slots ahead of Crean and Painter.

If anything, this list shows the very tenuous status of every college coach.  Win, and respect washes over them.  Lose, and the fall down a slippery slope begins and the bottom comes in a hurry, and the media loves nothing more than a fall from grace – except the redemption that follows for the lucky ones.

Speaking of redemption, how about Jim Crews from Saint Louis University?  He’s ranked #29, one slot ahead of coaching icon Bob Huggins.  When at Army, Crews teams were 59-140.  It’s virtually impossible to win at Army, but the losing made Crews almost unemployable.  He went to work for Rick Majerus and took over the Bilikens after Majerus passed away.  Five years after being in the bottom 50, he’s #29.  No smarter today, but the “experts” now love him.

Coaching is not a job for the feint of heart.  Many coaches are dads, and their kids need food and a house and a college education and Christmas presents.  There are message boards filled with the rants of deranged and troubled fans, and college towns are packed with passionate fans who expect wins and take losing far too personally.

Whatever the “experts” say about coaches, and however the fans rant, the joy of coaching is in the behavior and accomplishments of those players they have mentored.