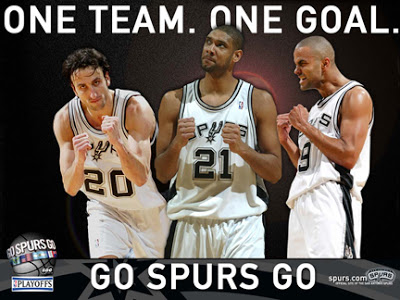 Parents of young basketball players ask sons and daughters “How many did you score?” before asking if the team won because they don’t know a hell of a lot about the game, and more importantly don’t give a damn about the other kids on the team.  Some are nutty enough to check the score sheet after a game, and walk away smiling after a loss.

That puts coaches at an immediate and almost impossible to overcome disadvantage in trying to teach kids to play the game the right way.

The San Antonio Spurs are doing a fantastic job of schooling all of us a little bit in these NBA Finals after taking a 3-1 series lead of the media darlings of the NBA – the formerly unbeatable and imitated Miami Heat.

Never mind the Spurs should have won last year’s championship in six games, this year’s clinic by the Spurs on both ends has put the focus on team-first basketball.

Everything the Spurs do is focused on team success from the unfortunately unique offensive selflessness to communication on defense to crisp offensive movement of the ball to the smartest salary structure in professional sports.

The salary of the entire Spurs team is only $63,115,911.  The New York Knicks didn’t make the playoffs, and their players earn a total of $25 million more.  The underachieving Lakers cashed $77 million in checks.

Future no-brainer hall of famer Tim Duncan earns only $10.3 million per year.  Tony Parker makes more than anyone on the Spurs with a $12.5 million salary.  Knicks forward Amare Stoudemire took home $21.7 million for the 2013-2014 season, and injured Lakers guard Kobe Bryant made over $30 million.  Neither of their teams made the playoffs.

In the locker room, no one on the Spurs talks about “selfish dudes,” and there are no instances of guys trying to pad stats because they are in a contract year.

The Spurs just go out and play basketball the way it is supposed to be played – just as players from age 8-18 should but rarely do.

Click here to finally be proud of your smile – Dr. Mike O’Neil at Today’s Dentistry will make your teeth shine

Moving without the ball is so important to basketball, but it’s not the only important thing the Spurs do well.  They know exactly where the other four players are on the floor at all times, and that requires people doing precisely what they are supposed to do every second of every possession.  It requires accurate passes to open teammates, and an attitude of forgiveness for those who miss open looks.

Defensively, basketball is played not just by the man guarding the ball, but by the entire team.  Communication and willingness to help at the right time are key.  Not only are the Spurs really good defensively, but they consistently hold themselves and each other accountable when they fail.

Basketball is a behaviorally challenging game in that individual accomplishments are such temptations, and can be occasionally rewarded.  A great individual effort can carry a team, but rarely for an entire season.  Winning consistently requires a devotion by all five players to focus on the success of the other four.

Acting is like that.  As we watch, our concentration is on the words spoken by the performers but for those words to convey the most profound meaning, the other actors must listen intently.  Just as acting is about listening, basketball is about what you do when you don’t have the ball and are noir defending the man with the ball.

The Spurs get that better than any other team in the NBA, and because the eyes of America’s youth are watching the success selflessness is bringing to Popovich’s team, maybe coaches who understand the game can impress upon them the need to focus on the success of teammates with the same energy they devote to their own glory.

Because of the Spurs relentless drive to play the game correctly, they are in a position to win the fifth world championship of the Popovich era, and finally America is awakening to the fact that basketball played with attention riveted on success for others is winning basketball.

Never in Popovich’s 17 full seasons as coach have the Spurs failed to win 61% of their games, and never have they run their offense through an individual.

The way the Spurs play basketball is the way life should be lived, and that is the message youth basketball can convey. Team success is earned by those committed to the success of the whole rather than the parts.  Every game the Spurs play against the Heat sears that message into our minds, and those who watch and learn are better for it.