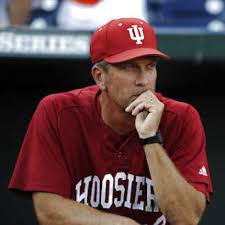 Indiana baseball manager Tracy Smith has pulled the plug on his spectacular reign.

A baseball coach being hired away from Indiana University to Arizona State brings both good news and bad news.

Given a choice, people almost always want the bad news delivered first, so here it is – Tracy Smith is packing a bag for Tempe.  The great work he has done over the better part of a decade in Bloomington has been stunning, and he will be missed.

Smith has driven the growth of the baseball program at IU to the point where it is seen as the best in the Big Ten.  Now, the Big Ten isn’t the SEC, Pac-12, or Big 12.  Programs on those warm weather campuses have a huge advantage over the Big 10, but Indiana still earned the #4 national seed in this year’s NCAA Tournament.

Players are regularly drafted out of Indiana, and the momentum through the recently concluded 2014 season has been relentlessly positive.  Kyle Schwarber was drafted fourth overall in the MLB Draft, and was promoted out of low-A ball by the Cubs after only five games.

The new stadium – Bart Kaufman Field – is regularly filled to watch IU play, which is a stark departure from what used to be the case at Sembower Field a couple of block south.  We used to kill time better spent studying luxuriating at Sembower watching greats like Sweet Swinging Billy Mueller and “the Man with the Golden Arm” Mike Humphrey win, but a trip to the College World Series was unimaginable.

Smith turned the program around through the force of his faith, diligence, and strategic dynamism.  He will now try to work his magic for the five-time national champ.  The Sun Devils haven’t won a championship since 1981, but the program has missed a trip to the NCAA Tourney only once since 2000.

Indiana Baseball’s wikipedia page does not list notable alums.  The two big leaguers I can recall off the top of my head are Barry Jones and Mickey Morandini.  That list will grow very shortly with Schwarber and others, but the difference between the Arizona State and Indiana programs is best expressed with those lists.

The good news for the Hoosiers is this – Arizona State wants an Indiana coach in the first place.  That speaks to just how far the program has come.  The momentum is extremely positive, and the quality of managers interested in the Indiana gig will be a hell of a lot greater than it has ever been.  Athletic Director Fred Glass won’t have to sift through hundreds of potential candidates to find a diamond in the rough.  His list will contain names of men ready to continue and potentially expand the tectonic shift in culture at Kaufman Field.

Smith rolling out to Arizona State isn’t unlike the decision Brad Stevens made to leave Butler for the Boston Celtics.  The Arizona State job doesn’t open that often (Tracy is the fifth coach in the program’s history), and the timing may never be right again for the Sun Devils to offer Smith the opportunity to follow in the footsteps of the great Bobby Winkles.

Click here to hire the best dentist in Indiana to fix your teeth – Dr. Mike O’Neil at Today’s Dentistry

That Indiana has developed a baseball program from which Arizona State would lure a coach is in itself a great testimony to what has happened in Bloomington.

Smith will be missed, but evolution is necessary and change inevitable.  It may have come a hell of a lot sooner than anyone (especially Glass) would like, but the time to move forward has come – like it or not.

The challenge was always going to be finding the right guy to replace Smith.  That time unfortunately came yesterday.