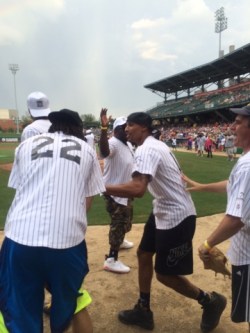 While the Pacers played softball for the Indiana Children’s Wish Fund, their boss dealt pick 57 for cash.

For over four hours, seven of us sat in the Indiana Pacers media room waiting for team president Larry Bird to pull the trigger on a move to bolster their roster.  TV crews were absent.  Radio hosts, minus me, nowhere to be found.  Lots of pizza, few mouths.

The writing was on the wall that the Pacers would not upset the 56-win, back-to-back Central Division Champion, almost everyone under contract Indiana Pacers apple cart.  Bird seemed likely to pass on the chance to turn back any of his cards for fresh ones.

But no one thought they would come away completely empty after a long night of watching other teams restock their shelves.  The Pacers entered the night with the 57th pick, and at the very least, they would at least grab the rights to some heavily consonanted Euro.  That wouldn’t be thrilling news, but it wouldn’t be nothing.

In the end, it was nothing as the Pacers swapped their lone pick for cash.  The Knicks evidently had their eyes on Frenchman Louis Labeyrie, and the Pacers didn’t, so owner Herb Simon gets some walking around money instead of the rights to a guy whose name sounds more like a character on “Hogan’s Heroes” than the future piece to an NBA champion.

Bird said after the draft that the Pacers had their eyes on a guy who went a “couple of picks” before, but when he was gone, they decided nobody would be as good as the remaining somebodies.  A couple of minutes later, Bird amended his remark to “a few picks earlier,” which I took as an admission that he was too specific about which guy they really liked.

Bird was also very direct in his criticism of the manner in which Pacers assets were deployed last season.  He expressed love for his players many times in his 10 minute Q&A with the surviving media, but there was no such declaration of affection for Frank Vogel, who was never mentioned by name, but was evoked several times as Bird decried hot players being replaced, a lack of accountability, and the sparse deployment of Lavoy Allen.

Allen was the forgotten man on the Pacers roster following the trade that brought him over with Evan Turner from the Sixers for former all-star Danny Granger.  Bird mentioned him twice by name as a guy the Pacers would target to re-sign.

Conrad Bruner found that odd, and asked the question that was rattling around my head too.  “What the is your point in discussing a guy as a free agent target who never played an important minute as a throw-in who was used to even up the salaries so the Pacers could get Evan Turner?”  Conrad is too polite to ask it like that, but the point that was confirmed by Bird was that he believes Allen should have played a significant role, but didn’t.

Whose fault could that be other than Vogel’s?

Throughout the small gathering, Bird was disappointed but good humored, until he began to talk about asserting accountability, letting hot players roll, and finding meaningful minutes for Lavoy Allen.  During those moments, Bird bristled a bit and looked like a man who is still smarting over the Game Six elimination his team suffered at the hands of the flawed Miami Heat in the Eastern Conference Finals.

These are all inferences I’m making about Bird’s dissatisfaction with Vogel, but if I were Vogel I would pay close attention to following the not so veiled advice of his boss because he sure as hell seemed committed to holding Vogel accountable if the rotation is not relaxed, if players are not penalized for bad acts, and if Allen is a relentless DNP-CD.

Bird is committed to what he knows to be the best route to sustained success, and if Vogel doesn’t follow that path to the letter, someone else might.