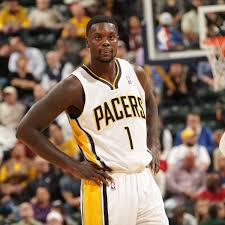 Lance Stephenson left a lot of money on the table to accept the offer of a team that insulted him with a third year team option.

There is weirdness afoot in the camp of former Indiana Pacers guard Lance Stephenson, who passed on five years and $44 million to stay with the Pacers in favor of three years and $27 million to bounce to Charlotte.  Oh, and there is a team option for the third year.

I understand Stephenson being eager to become a free agent again more quickly than the five years represented by the reported Pacers offer.  He gets within a few bucks of the same money each season, but gets to re-enter free agency at the age of 26 instead of 28.  That could represent at $20 million difference in what Stephenson might earn in 2017-2018 and 2018-2019 compared with the $17.6 million total he would have gotten from the Pacers.

But Charlotte asked for and received a team option for the third year of the deal, which is a bit of an insult to the mercurial starting wing.  For a proud guy who pays close attention to how much respect is shown him, a team option communicates something entirely different.

Where Pacers president Larry Bird was willing to commit serious cash longterm, the Hornets wanted the ability to extricate themselves from a relationship with Stephenson after two years.  And Stephenson apparently either agreed or neglected to read the fine print – or is confident enough in his own ability to continue his development that he believes that team option is a moot issue as it will never be exercised.

If I were Stephenson, I would have asked why a team option in year three was important to the Hornets.  Maybe he did, and the answer was a hodgepodge of blather that went in one ear and out the other.  I doubt the truth would have impressed Stephenson.

The truth would have sounded something like, “Because we’re afraid you’re a wing nut!  All that weirdness could be an act, but we want to protect ourselves just in case you are truly a crazy person without any impulse control.”  That would not have played well, but the truth hurts and it’s the only explanation that makes any sense for a third year team option.

So Stephenson is doubling down on himself.  He’s passing on a guaranteed $44 million playing for a team that appreciates (or at least tolerates) his quirks in favor of as little as $18 million from a team that wants coverage in case Bob Kravitz is right and Stephenson is another Ron Artest in waiting and serious cash will be the gasoline needed to turn his whimsy into a full on blazing banana factory of bizarre behavior.

The Pacers are either scrambling this morning to activate whatever their Plan B is, or they are breathing a big sigh of relief.  There is probably a little of both.  No doubt Stephenson’s act wore thin on everyone inside Bankers Life Fieldhouse last season, and some teammates pined for this day – the day he would be someone else’s problem child.

Stephenson was always entertaining to fans, but for teammates it was obviously a different story.  Some cite Stephenson’s attitude as a necessary component to the Pacers success, and now we get to find out whether his presence was a net positive for the two-time NBA Central Division champions.

An upcoming season that already promised a healthy dose of intrigue for the Pacers just got another subplot, and if Stephenson is right that he can double his value during the next three seasons, he stands to win big in 2017-2018 (the first season after the likely re-plate for the collective bargaining agreement), and the Pacers will regret making the moves necessary to win the bidding for Bird’s former second round project.

Stephenson should have been insulted by the Hornets offer, but apparently wasn’t.  It appears the Pacers held firm in their negotiations, and we’ll find out whether they were right to.

Maybe Plan B is where the Pacers and Stephenson can live happily ever after, but leaving a potential $26 million on the table is a strange choice for a strange player.