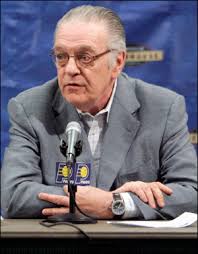 Donnie Walsh chose his words poorly as he described his reaction to Lance Stephenson signing with the Charlotte Hornets as “surprised.”

Choosing words correctly while being interviewed is very important, as NFL senior vice President Adolpho Birch discovered Monday in his debacle of an interview with Mike & Mike on ESPN Radio.  Indiana Pacers consultant and former president Donnie Walsh spent some time on NBA Radio, and said he was “surprised” by Lance Stephenson signing with the Charlotte Hornets.

Not the right word for an executive to use in describing his thoughts on the defection of a key employee.  The proper phrase would have been “prepared for.”

What Walsh said was, “I was surprised at that to be quite honest. I was worried about Lance in that there are a lot of teams out there with big money and when you get into the free-agent period, usually teams will over extend themselves because they know to get a guy away from another team, it’s going to take probably more money than if you were in a straight negotiation with the player. So I was expecting some real high numbers, which we’d try to react to. And that didn’t happen.

“We gave him the top number we could’ve given him thinking, ‘This is the most money we can give you.’ And so we gave it to him. And when he didn’t take that, I was thinking he was probably going to get a big number. As it turned out, he got about the same as three years (with us), no two years really. It’s a two-year deal with an option on the part of the team for the third year. That surprised me. I kind of get his thinking, but I was surprised that he did that.”

People running businesses should do everything they can to strive for the best, but prepare for the worst.  Preparation will always mitigate the negative effect of unexpected events and the responses they prompt.  There is no way to anticipate with perfect exactitude the actions of an employee, but “surprise” is not a word that great leaders use to describe their reaction to any occurrence.

Stephenson might not have made the best choice for himself and his family by leaving a potential $26 million on the table, and the Pacers might disagree with Stephenson’s assessment of the two deals he was offered, but they should not have been “surprised” by anything Stephenson did.

An employer should ponder every possibility, and plan for every eventuality – not be surprised, especially by the actions of a wing nut whose actions are difficult to anticipate from minute to minute much less as he decides between gigantic financial deals.

It can be argued that the Pacers executed a reasonable Plan B by signing C.J. Miles and Rodney Stuckey, but Walsh made the Pacers appear silly and amateurish with his comments about being surprised.

Walsh was a very capable NBA executive for a long time, so maybe his lack of specificity with language can be excused.  And who really knows to what extent he is part of the decision making process in the Pacers offices.

Dan Dakich spoke about this yesterday on his 12p-3p radio show on 1070 the Fan, and I continued the conversation on my show on CBS Sports 1430.  Dan was harsher than I in his assessment of Walsh and the Pacers about the need to never be surprised.  There is just no way to anticipate each potential outcome, and I leave open the possibility that Walsh and the Pacers were personally disappointed and surprised, but professionally prepared eager to implement every contingency.

Click here to make your dental health a priority by choosing the best dentist in Indiana – Dr. Mike O’Neil at Today’s Dentistry

I would offer the challenge currently facing Indiana University athletic director Fred Glass as an example of a surprised but prepared manager. Curt Miller was doing a very nice job of building a solid women’s basketball program, but resigned suddenly last week.  Glass was likely very surprised by the resignation of a valued employee and leader, but was also very likely prepared to accept the news and move forward in the process of hiring someone to continue the work Miller began.

Keeping a list of candidates to replace key employees is the first order of business for any executive because being prepared smooths the bumps turnover brings – especially unexpected and impossible to anticipate changes.