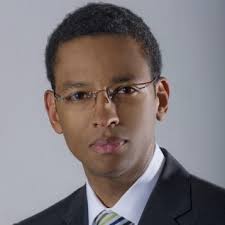 Adolpho Birch is a really smart guy, but even a smart guy can’t get away grammatically suburb justifications for bad management.

There is a queasy feeling people get when lawyers babble in circles when responding to tough questions they have no interest in honestly answering.  That feeling came and never left during Mike & Mike’s interview yesterday with NFL senior vice president of labor policy Aldopho Birch as he danced clumsily around questions about the two-game suspension of Baltimore Ravens running back Ray Rice.

Hope that clarity and reason would be forthcoming from Birch was poorly invested.  The more reasonable expectation was the torrent of grammatically correct rhetoric that carried no meaning from a Roger Goodell lieutenant, and that was what listeners got.  If the NFL wanted to share real insight and information about its motivation in giving Rice a pass, Goodell himself would have gotten in front of it.

Other than as a textbook example as to why we should never listen to an attorney with nothing to gain by telling the truth, this was a ludicrous and wasteful exercise.  Mike Greenberg and Mike Golic did nice work toeing the line between respectful inquiry and holding a powerful official culpable for his vapid blather, but none of us is any wiser for Birch’s litany of nonsensical lawyerly responses.

The most bizarre comment by Birch showed the abject disconnect between what is believed in the NFL’s offices and in the court of public opinion, “”But if it is a question about what the principle of the league is and what standards we stand by, that cannot be questioned. I think it is absolutely clear to all involved that the NFL does not condone domestic violence in any way and will not tolerate it in our league. I don’t know how you can reach a conclusion other than that although I certainly respect the opinion.”

Goodell has always been resolute in showing he takes very seriously the image of the NFL among fans, but in this case for some reason, he totally punted.  Women comprise 35% of the viewers of the NFL product, and ESPN is as close a media partner with the NFL as exists in sports other than the league owned networks.  The female demographic is correctly at risk, and ESPN has abandoned its cozy buddy role to advocate for a more serious response than half of the suspension NFL players receive for PED use.

Indianapolis Colts outside linebacker Robert Mathis was suspended for the first four games of the 2014 season because he used Clomid as a fertility aid to give his mom another grandchild before she succumbs to stage four cancer – or so he and his doctor have ardently claimed.  Rice physically causes his then-girlfriend to lose consciousness, and gets a two-game rip.  That disproportionate response by the NFL was the cause of Birch’s wobbly and contradictory performance.

When asked by Greenberg whether the NFL officials who meted out the punishment had been privy to additional video tape or information that led to the decision to suspend Rice for only two games, he responded, “Listen, I understand everybody’s desire to know the details of what was reviewed, who we talked to, etc…, but I think you have to understand that there is a certain level of privacy that should be accorded both to the process and to those persons involved, and, uh, I think that it is important for us to respect that in this case.”

That is among the weaker answers to a good question I have ever heard.  That is a Nathan Thurm (a Martin Short character who never directly answers a question) response that paints the NFL as an organization that believes the truth to be even more harmful to the shield than the current level of public skepticism about Rice’s behavior.

A little later, Birch took to speaking from both sides of his mouth by first saying that a comparison between the Rice punishment and the Ben Roethlisberger penalty for his role in the sexual abuse inflicted upon a girl in a Georgia bar would be inappropriate, and then claimed the NFL was bound by precedent with NFL cases and cases with other leagues to determine what was appropriate.  Which is it?

Throughout the interview, Birch obfuscated, contradicted, and behaved as someone who didn’t believe a single word that he offered Mike & Mike listeners.  It was bizarre, unpleasant, and resulted in thousands of listeners hoping that Birch would just hang up rather than continuing to dig himself deeper and deeper and deeper.

There is a danger in believing you are the smartest guy in the room because while it might be true, at some point even the brows of the stupid furrow in the face of complete illogic flawlessly presented.

“If you can’t explain it to a six-year old, you don’t understand it yourself,” is an oft used quote from Albert Einstein, who was always the smartest guy in every room he walked into.  The table below was not explained to the satisfaction of Mike & Mike, and they are roughly 50. 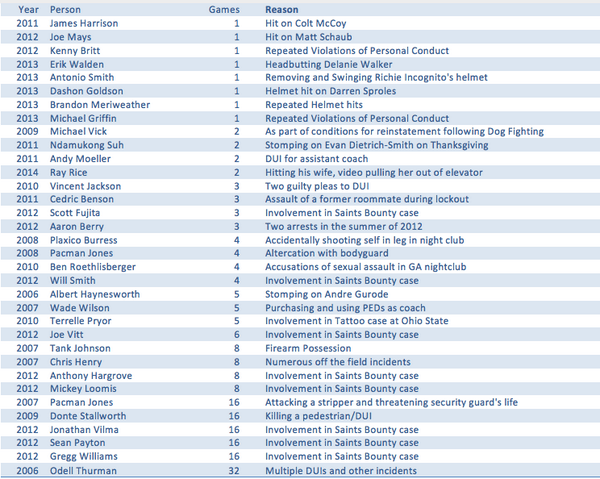