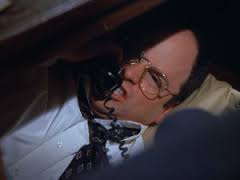 Roger Goodell is likely enjoying a Costanza-esque under desk wonderland this morning as his world crumbles.

Hey, it could be worse!  At least you didn’t knock your wife unconscious or make your son’s scrotum bleed.  Feel better?

You seemed like a good guy in the beginning – someone willing to hold people accountable for their behavior because it was the right thing to do.

Sadly, you have been revealed as a self-important and reactive commissioner unwilling to take a stand and lead the NFL toward wisdom, reason, and responsibility.  That doesn’t make you a bad guy, just a typical bureaucrat motivated by your own professional survival and wealth than doing the right thing.

This morning, you are hiding under your desk hoping that ill winds stop blowing, but fail to realize that you caused the winds to blow this hard and long yourself by the stance you took in 2007 by enacting the player conduct policy.  Instead of encouraging teams to draft talented men unlikely to commit felonies, you became the prosecutor, judge, and jury.  Instead of mandating the teams take responsibility for their own employees, you took charge.  That move made the last two weeks impossible to avoid.

The wobbling in assessing penalties for Ray Rice and Adrian Peterson would be funny if they weren’t so pathetic.  No punishment announced for Rice five until late July, then the universally reviled two-game rip for knocking his soon-to-be wife unconscious in February.  Then, a policy of domestic violence that requires a six-game suspension for first time violators and lifetime ban for the second.  That was almost immediately followed by the release to TMZ of the video you claim you never saw of Rice’s two punches from inside the elevator is released, and you ignore your own policy to suspend Rice indefinitely.

The Peterson saga took another step toward Rice-like inconsistency this morning as Peterson was put on the exempt list – which will keep him off the field until his felony case of child abuse is adjudicated.  This was less than two days after Peterson was reinstated after his suspension for last weekend’s game.

Excuse me if I’m dizzy as I try to keep track of what discipline your office recommends to teams or metes out.

Of course, the Peterson recalibration was prompted by money.  Sponsors threatened to pull cash because being aligned with the NFL Shield is not seen as a positive anymore, and it’s not because of the Rice video or the welts on Adrian Peterson’s scrotum.  It’s because you have appeared weak and incapable of leading the NFL in a way that inspires trust in the consumers of your product.

The NFL has appeared to be guided by polling, rather than a man of conviction dedicated to following a predictable ideology.  Either you should rely upon the legal system to determine guilt or innocence and then issue consequences, or you should do it yourself.  But if you do it yourself, you need to stand for something, and stick to your decisions.

Instead of thinking and writing about a must win for the Indianapolis Colts this Sunday, my head aches as I try to figure out what the hell is going on with Peterson, Rice, Greg Hardy, Ray McDonald, Josh Gordon, LaVon Brazill, and Wes Welker.  What was wrong yesterday is no longer wrong, and while sliding the acceptable level of marijuana presence in a player’s bloodstream to allow for second hand smoke is a positive, I have no confidence that it won’t change tomorrow.

I get that when Budweiser, Nike, Radisson, and other clients start issuing public statements that might foretell each either reducing or ending their investments in the NFL and its franchises, you need to respond.  Your first responsibility is to the owners’ wallets, and not to be the moral leader of the free world.  But when your personal conduct policy allows you to so grotesquely miscalculate the appropriate punishment for punching a woman in an elevator that he is asked to sit for one eighth the time as another guy who tests positive for pot, corporations are going to issue those statements.

You look weak and helpless – like a boxer without an answer while being beaten silly.  You have been in a clinch, trying to wait out the rest of the round, since the disastrous interview with Norah O’Donnell, but the damn bell to end the round just won’t ring.  It is only a matter of time before the cumulative damage brings you to your knees.

Those who have said the NFL may implode and fade from our society sounded like kooks to me until the last six weeks.  It now seems very likely that the recession of the NFL has begun, and that it is only a matter of time until fans are so tired of the moral equivocations and head injuries that they turn elsewhere with their attention and gambling dollar.

I’m usually a guy with answers for those in need, but I have no idea how you survive as commissioner.  Blood is in the water, and the sharks are circling.  The media like to think of themselves as sharks, but they are actually the chum.  The sharks are the corporations who write giant checks to your owners.  If they decide to invest elsewhere, as appears inevitable (because what company doesn’t love claiming the moral high ground?), the support you enjoy from owners will vaporize in an instant.

Hard to feel sorry for a guy making $42,000,000 a year, but I can’t help it.  Massive wealth can’t make your failures any easier to admit and accept.  That probably doesn’t help you feel better, but time will heal your wounds – just like those of Peterson’s children and Rice’s wife.

One thought on “NFL misery continues – and commissioner Roger Goodell needs a pep talk, which I fail in providing”