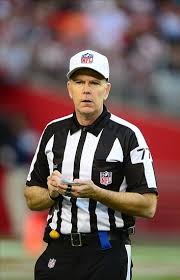 Referee Terry McAuley didn’t win the game for the Philadelphia Eagles, but his ridiculous horse-collar call sure didn’t help.

A swing and a miss on a pass interference non-call, and a bizarre horse-collar penalty two plays later didn’t directly lead to the Indianapolis Colts losing to the Philadelphia Eagles 30-27, but they sure didn’t help.

The Colts led 20-6 after an Adam Vinatieri field goal with 6:43 remaining in the third quarter, and the game appeared to be over.  Football games are almost always won by the more physical team, and the Colts were winning the battle at the line of scrimmage on both sides.

And then the Eagles awakened.  Less than four minutes later, the Eagles had tied the game after a LeSean McCoy run, Trent Richardson fumble, and Darren Sproles run for another touchdown.

Still the Colts answered that reversal with another touchdown, defensive stop, and subsequent drive that appeared to put them in a position to – at the minimum – to generate another Vinatieri field goal and take the lead to 10 points with five minutes left.

The officials had other ideas.  Obvious contact between receiver T.Y. Hilton and a defender resulted in Hilton on the turf and the football in Eagles safety Malcolm Jenkins’ hands.  Two plays later McCoy ran right and was tackled from behind by Colts safety LaRon Landry, who clearly grabbed the “M” on the back of McCoy’s jersey.

Referee Terry McAuley threw his flag for a horse-collar penalty, and the run that would have resulted in a third and six at the Eagles 28 became a first and 10 at the 43.  Terrible call, and potential game-changing result.

Even after the game tying touchdown, the Colts had the ball with 3:25 left, and a guy under center who has led them to 10 4th quarter come from behind scores in 33 previous games.  The Colts decided to attack with their heads instead of their talent, and tried to manage their way to a game winning score.  Two runs and a short incomplete pass later, the Colts punted to the Eagles and never touched the ball again.

The Eagles used two minutes to move the ball 42 yards, and former Colt Cody Parkey knocked a 36-yard field goal as time expired to steal this game that the Colts should have won.

If pass interference is called on the Hilton play, the Colts have a first down at the Eagles 16 with 5:15 left.  Even if stoned after three runs, Vinatieri likely punches a field goal through with just over three minutes left.  Game over.

If McAuley isn’t momentarily incompetent, the Eagles face a tough third and six.  Probably a 50/50 shot at forcing fourth down and a punt.  Likely game over.

Sure, McCoy and perennial Colts killer Darren Sproles raised 310 yards full of hell at the expense of a Colts defense that had difficulty corralling them despite the Eagles relying on a third string right tackle and backup guard to clear space.  Truth be told, McCoy and Sproles don’t need a lot of blocking to render defenders inert.

The most difficult portion of the schedule is behind the Colts with Jacksonville and Tennessee offering the chance to even their record in the next two games.  Only 11% of teams starting the season 0-2 have earned a spot in the postseason since 1990, but none of them played in the 2014 AFC South.

There were bright spots last night – just not enough to walk out of Lucas Oil Stadium with a win.  Trent Richardson ran for 79 yards on 22 carries.  Sadly, that was his biggest day since Thanksgiving weekend in 2012 for the Cleveland Browns.  Ahmad Bradshaw ran like Ahmad Bradshaw with 70 yards in 13 attempts.  If both can run like they did last night, the Colts might become the time of possession kings the Colts coaching staff dreams they can be.

The season isn’t close to over, but that has a lot more to do with the division in which the Colts play, rather than the quality of their play.

2 thoughts on “Indianapolis Colts loss not just because of officiating errors, but they didn’t help”