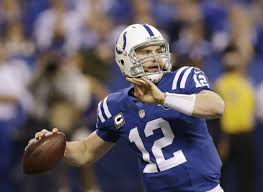 Andrew Luck has been the best quarterback in the NFL thru four weeks, and he’s a nice distraction for football fans afraid to watch what happens in Bloomington and West Lafayette.

First the good – the Indianapolis Colts were dominant for the second straight week in a league where parity is king, and the Fighting Irish of Notre Dame hammered the type of team that it should.

Purdue fought like hell through the first half against Iowa before withering down the stretch as is expected of a team without depth early in the rebuilding stages of a new coach’s tenure.

Indiana laid a total egg on a day when people started to believe that maybe the tide was turning in Bloomington after an upset against a ranked SEC team on the road.  Hoosiers fans should have known better as Indiana rolled over in every phase and accepted a beat down at the hands of a mediocre Maryland team missing three defensive starters and losing their offensive leader D.J. Brown with a first half injury.

Andrew Luck and Everett Golson were virtually identical in their excellence.  Luck was 29-of-41 for 393 yards and four TDs/two picks while Golson complete 25 in a row during one long stretch of the game to finish 32-of-39 for 362 yards, four TDs/two picks.

Luck’s pick caused the only comedy in the 41-17 thrashing of the Tennessee Titans, as he threw a pass directly to a defender and then sprinted toward him to make the tackle.  It looked like maybe Wes Woodyard angered Luck by talking about his mama, and Luck muttered “number 59,” a la Bobby Bouchee in The Waterboy.  Then when Luck got the opportunity, he threw it to Woodyard just so he could punish him with a physical hit.

No such comedy was enjoyed by Indiana fans at Memorial Stadium.  The offense sputtered, and the defense seemed to miss as many tackles as they made.  It was as if the Hoosiers were plenty satisfied with their road upset win against Mizzou the previous Saturday, and decided that showing up was all that was necessary.

The Purdue loss was entirely foreseeable as their depth will bring disappointing second halves for another year or two as Darrell Hazell continues to add talent through recruiting and strength on the young players already in the fold, but the offense miseries were difficult to watch.

To amass only 156 total yards, and have a passing game that generates an average of only 2.6 yards per pass makes a win – even in the Big Ten – out of the question.  The longest reception of the game for the Boilermakers was only 10 yards.

Other than in the very northern region of Indiana, where Notre Dame has enjoyed success, college football excellence has been almost impossible to find in this state, and it appears that nothing new is on the horizon despite relentless changes in coaches.

The Colts and Fighting Irish are flawed, but despite the five turnovers against Syracuse and the terrible interception from Luck, the effort for those two teams is beyond question.  Purdue is simply outmanned at this point.  In Bloomington, that was not the case.  It seemed the Hoosiers embraced the misconception that showing up is enough.

Respect should be conveyed to others, not conferred upon themselves.  After 20 years of terrible, you would think Indiana would be inoculated from egomania.

Changing the DNA of a program of franchise requires relentless heavy lifting.  The four major football teams in Indiana show that’s true year after year.  The Colts – always competitive despite flaws as long as the quarterback is healthy.  Notre Dame is Notre Dame, which equates to mostly good regular seasons and trips to mid-tier bowls.  And minus the eras of Bill Mallory and Joe Tiller (or Jack Mollenkopf if you go back that far), Indiana and Purdue are Big Ten bottom feeders.

That’s life for a football fan in central Indiana.

Hope rears its ugly head every now and again, and then punishes us.  Last weekend showed more of the same as the Colts, Irish, Hoosiers and Boilers were true to form.