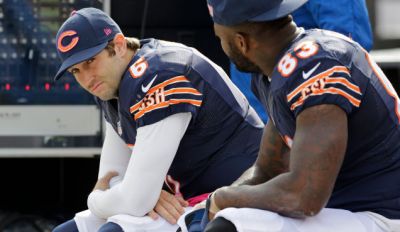 With this body language, why would any Bears fan expect more of Jay Cutler?

There comes a point in every NFL season when teams and players are faced with reality.  They either show themselves to be poor, solid, or outstanding.  That point came yesterday for the Chicago Bears, Indianapolis Colts, and Peyton Manning.

Every season is like a mosaic with tiles being added each week.  Some pictures take longer to achieve focus than others.  Enough tiles have been placed through week seven to see how the pictures will look at the end of the season.

The Bears are not the kind of football team either they or the fans expected when this merry-go-round started.  Super Bowl talk abounded in Chicago despite the reality that the relentlessly mediocre Jay Cutler is their quarterback.  People outside Chicago wanted to throw their arms around the delusional Chicagoans at Soldier Field and assure fans that while failure was certain, their lives would go on.

If Chicago can survive a 106-year championship drought on the north side, embracing the notion that Cutler will play like Cutler should be relatively painless.  In his previous eight seasons, Cutler’s passer rating has been between 85,.7 – 89.2 six times.  That is who Cutler is, and quarterbacks that average need a much better defense to win than the Bears possess.

After losing 27-14 yesterday at home to the Miami Dolphins, the Bears are two games in back of the Detroit Lions and Green Bay Packers.  Players went nuts in the locker room after the game, and offensive lineman Jake Long vented all over the fans who had the temerity to fill Soldier Field with boos.  Pointing fingers at fans is all you need to know about the Bears.  They are as emotionally fragile as they are mediocre.

When the Indianapolis Colts started the regular season 0-2 after an 0-4 preseason, the team continued to work and believe in the process that led them to back-to-back 11-5 records.  Fans kept their heads, like Hoosiers usually do.  After five straight wins, the Colts appear to be at the head of the class in the AFC South – if not the AFC.  Faith rewarded.

Despite two first half turnovers that robbed the Colts offense of the opportunity to create separation against the AFC North leading Cincinnati Bengals, the final result was a 27-0 beatdown – the Colts first shutout of an opponent since 2008.

Now, the question isn’t whether or not the Colts are good enough to repeat as AFC South champions, but whether they are ready to take another step forward in the postseason to earn a spot in the AFC Championship or a step beyond.  Chances look pretty good.

While the Colts have the most prolific passer in the NFL through seven weeks in Andrew Luck, it’s the defense that is the clear show stopper.  To allow only one third down conversion in four consecutive games is a defensive accomplishment that is giving opposing coaches the level of headache that Luck is a couple of seasons from causing.

Peyton Manning eclipsed Brett Favre’s passing touchdown record last night, and he’s enjoying yet another Pro Bowl season at the age of 38.  With good health, Manning should roll past Favre’s other two most meaningful records (passes completed and passing yards) sometime next season.

Health isn’t a given, so all quarterback records being owned by Manning is hardly a fait accompli, but the fact that Manning is the best quarterback in the history of the NFL is a done deal.

Click here for great dentistry – get your teeth fixed by the best! Dr. Mike O’Neil of Today’s Dentistry

Comparing Manning with quarterbacks from different eras is tough as rules have changed, making the pass more popular today than ever.  What kind of quarterback would Dan Marino have been in 2014?  How about Johnny Unitas, Warren Moon, or Joe Montana?  There is no way of knowing, but we do know how good Manning is.

Manning owns only one championship, but he has never played a down on defense.  The only legit criticism of Manning is in his postseason mediocrity.  In the playoffs, Manning’s career passer rating is a Jay Cutler-esque 89.2.  In the regular season it’s 97.7.  Worse, his all-time postseason won-loss record is a very pedestrian 11-12.  Those numbers fuel the valid arguments made by fans of Montana.

It’s a shame that Manning wasn’t able to set the record as a member of the Indianapolis Colts, but I don’t think the Colts, Broncos, or their respective fan bases would change anything right now – which is a helluva credit to Manning, Luck, and some very astute fans.  Luck is where he belongs, and so is Manning.  This is one of the few true win-wins in the history of elite players changing teams.

Like Dennis Green angrily bleated about the Bears in 2006, “They are who we thought they were!”  The Bears, Colts, and Manning through seven games are filling in the tiles for their 2014 mosaic very quickly.