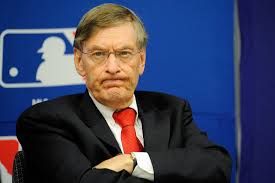 Resigning is the best thing commissioner Bud Selig has done for baseball in his 22-year reign.

Momentum should build to a frenzied crescendo through the end of a regular season and throughout the postseason of a major league sport.  The five-day delay between the end of the NLCS and the beginning of the World Series has reduced the enthusiasm over this season’s Fall Classic to near zero outside Kansas City and San Francisco – the two cities that will serve as hosts.

There was a time in America – not too long ago – when the World Series was the most talked about event on the American sports calendar.  This morning, the beginning of the World Series had to wait nine minutes at the top of ESPN’s first live Sportscenter for its first mention.

The World Series sat behind the recap of a mostly meaningless Monday Night Football game between the Pittsburgh Steelers and Houston Texans.

In today’s 9:00 Sportscenter, the amount of time devoted to Game One of the World Series was 8:44.  Compare that to the media saturation that surrounds the Super Bowl, and the disparity in TV ratings for the two events is easily explained.  Forget the Super Bowl, the Final Four, and the NBA Finals.  Monday Night Football gets far more media attention than any of the World Series games.

Baseball’s recession from the top spot among American sports fans has been presided over by Bud Selig, a commissioner who was little more than a toady for the owners.  The players have their union, the owners have their commissioner, and the fans have apathy.

Selig’s lauded moves during 20+ years as commissioner are contrivances that have allowed bigger media deals, more events, and home field advantage in the World Series being determined by the winner of the All-Star game.

Since the end of the regular season on September 28th, the Royals have played a total of eight games.  A game meant to be played nearly every day, has been played eight times in 22 days – all to please media companies who determine pace of play because they write the checks.

The office of the commissioner used to exist to protect the game.  It was implemented because of the Black Sox scandal in 1919 when owners saw the need for an impartial arbiter of justice who could mete out consequences for those who put greed ahead of the “best interests of baseball.”

That dynamic existed until Fay Vincent was exiled in 1992 after a vote of no-confidence by the owners.  The group that led the coup was headed by – guess who – Selig himself, along with White Sox owner Jerry Reinsdorf, Cubs chairman Stanton Cook, Twins owner Carl Pohlad, and longtime Dodgers owner Peter O’Malley.

Selig was elected commissioner, and since then, baseball has been run by the owners unobstructed by a presence representing logic.  Financial concerns have driven policy, and a lack of owners’  lockouts and players’  strikes have been the only positive result.

His work against performance enhancing drugs was reactive at best, and his decisions on behalf of baseball have largely benefitted the team he owned prior to accepting the position of commissioner (ownership stayed in the family for more than a decade while he was commissioner).

Click here to get your teeth cleaned and examined by the best in Indy – Dr. Mike O’Neil of Today’s Dentistry

Attendance has stayed relatively constant at just above 30,000 tickets sold per game since dropping from a peak of nearly 35,000 after 2007, but TV ratings’ continued slide explains ESPN’s apathy toward the World Series.

After regularly averaging a 30+ share (percentage of those watching TV) for each World Series game until 1995, ratings dropped to an all-time low of a 12 share in 2012.  In the postseason, the games are too long and too irregularly scheduled.

The hallmarks of the Selig Era have been the confused look on Selig’s face as one disgrace after another befell baseball, and his apparent ignorance to mounting evidence of his own ineptitude’s negative influence on the game’s popularity.

Selig continues to claim victory when a series of defeats have left the former national pastime a relic best captured by documentarian Ken Burns.

The only audience Selig plays to is a gang of 30 who live to squeeze the last dime possible out of their investments.  Those 30 love him today, but if the erosion of interest and audience continues, they won’t have much good to say in 10 years.

Selig, who is currently 80, likely won’t live to see the death of baseball.  As a man who refuses to embrace a 25-year old technological advancement like email, no one will be able to tell him about it if he does.