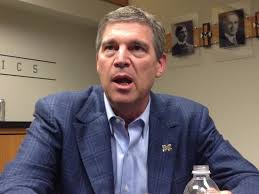 Michigan AD calls his decision to lower student football ticket prices from the most expensive to the fourth most expensive in the Big Ten evidence of listening.

Today, Dave Brandon is the athletic director at the University of Michigan.  Tomorrow, who knows.

Brandon’s status is the subject of conjecture at every level in Ann Arbor.  The president of the university is assessing his ability to lead this very profitable wing of the school, and students are a little less circumspect and patient.  They just want him gone.

In an effort to turn the tide with students, Brandon announced yesterday that Michigan will reduce the cost of student tickets from $40 per game to $25.

The timing is more than a little suspect as the current season is barely half over.  Adjusting the pricing structure for student season tickets could easily and correctly interpreted as a payoff for the students’ silencing their endless chatter about dumping the unpopular Brandon.

Michigan’s student ticket prices are the highest in the Big Ten, and the on-field performance of puts the Wolverines solidly in the middle of the conference standings.

The comment from Brandon describing the price reduction shows a desperate man willing to say strange things in the hopes that all will be forgiven despite evidence to the contrary.  “A nearly 40 percent reduction in ticket prices is, I think it’s fair to say, unprecedented,” Brandon told the Michigan Daily.

The truth is that the 37.5% reduction only appears large because the initial cost was insanely high.  Asking college students to fork over $40 for four hours of diversion from studies is as ludicrous as barring athletes from making a little extra money for signing a few jerseys or mini-footballs.

Brandon wasn’t done, “We listen.  We’ve been listening.  We really learned that two really important components to re-engaging with our students in trying to create a more robust, more enthusiastic and larger student section for next year’s football season was price and strength of schedule.”

Here is a great hint in deciding whether an administrator is really saying something or just yammering away to hear himself talk – if the word “robust” is used, he or she is yammering.

More importantly, if an athletic director at Michigan was at some point unaware that price and quality of opponent are important considerations in a student’s choice of whether to invest the time and cash required to watch their fellow students play football, he never should have been hired in the first place.  And if Brandon needs me to fill in the blank for the third leg on the stool of student engagement – it’s the quality of Michigan’s team, or the lack thereof.

Attendance in the student section has dropped from 19,000 to 12,000 during the past year as Michigan has become thoroughly ordinary during the 3-4 season through which the Wolverines are currently slogging.

College students enjoy seeing life with a clarity that can be maddening for men in Brandon’s position.  They understand very little about the situations that cause men to compromise their morality and decency.  Fear of not being able to feed a family, put kids through college, retire with a little cash in the bank, and smartest-man-in-the-room hubris can cause cranial mayhem for a man in Brandon’s position.

Click here if you need some serious dental work – Dr. Mike O’Neil of Today’s Dentistry is the best dentist in Indy

All students know with certainty is how the decisions of adults, of whose intellect they become more and more suspicious, effect them in the way they spend their time and money.  They are unencumbered by habits born of traditions that have become archaic right under the noses of adults.

For example, most college students are not subscribers to cable or satellite TV.  They have discovered that internet services provide all the programming necessary to live a good life – and the cost is roughly 90% less than Comcast or DirecTV.

There is a lot to learn from college students, and lowering ticket prices to the fourth highest in the Big Ten is not even the tip of the iceberg if Brandon wants to keep his job.