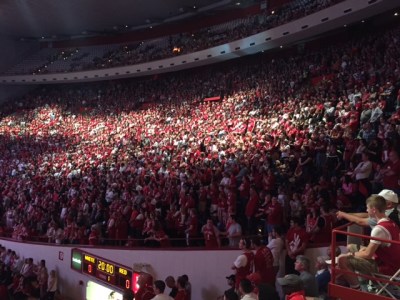 The 14,000 fans at Assembly Hall for the annual Hoosier Hysteria celebration will be the judge of whether the Hoosiers have taken a step forward from last year’s disappointing season.

Some guys just know where to be on the floor.  They move at a leisurely and efficient manner from one correct spot on the floor to the other, and whether or not they have the ball, they generally do the right things in the right way.

James Blackmon Jr. is one of those guys.

During Saturday night’s scrimmage at Assembly Hall, they was a lot of preening, posturing, and prattling, but Blackmon just played.

Mike Conley was a similar type of guy.  Whether he was playing high school, summer, or college basketball, Conley always looked like he was moving half-speed, but was always in position.  I watched Conley play at least 100 games during his teens, and I never saw him sprint full out.

Given his dad’s track background as on Olympic track star, I wondered how fast he might be if he put the peddle to the floor.  I still haven’t seen him drop the hammer.

Chris Mullin was another guy like that.  Always positioned correctly, but never in a hurry.

Last night, Blackmon hit threes, moved easily toward the basket, and seemed to be in control of the game every time he had the ball.  There aren’t many players like that.  A feel for the game of basketball seems to be in his DNA.

That’s not surprising given his own dad’s excellence as a basketball player at Marion High School and the University of Kentucky 30 years ago.

Blackmon was a man among boys playing in high school, and it looked no different last night.

While Noah Vonleh played a different position – a position of need for Indiana this season – Blackmon is a better basketball player than Vonleh, and whatever jitters fans have about the loss of Vonleh, Blackmon’s addition should more than make up for it.

Smooth and leisurely in his pace, but determined and steely in his competitiveness, Blackmon should be fun to watch for however long he stays in Bloomington – it won’t be four years.

Third year starting point guard Yogi Ferrell looks really good.  He’s leaner, quicker, and appears to be more confident both with the ball and as a leader.  Last year, there seemed to be a tug of war between Ferrell and senior Will Sheehey for control of the 2013-2014 Hoosiers, and as everyone knows, when you have more than one leader, you have no leaders.

Late signee Tim Priller was kind of the opposite.  He’s the blondest Hoosier I can recall, and his movements are accentuated by the response from his floppy hair.

Troy Williams is an athletic freak.  He floats through the air as effortlessly and explosively as anyone to ever play for Indiana.  With the ball, he is a threat to explode to the rack from anywhere on the floor.  Without the ball, he still seems to be unsure of what he’s doing.  That could be his response to playing in a scrimmage, or it could be a serious problem.  As I was told by a smart former basketball coach today, if a player plays all 40 minutes of a basketball game, he likely spends an average of four minutes in possession of the ball (40 divided by two because half the time is spent on defense, and then divided by five – the number of players on a team).  I have no doubt Williams can excel for those four minutes.

Nick Zeisloft – from Lyons Township High School and Illisnois State looks like a player who can help.  He appears to have no need of the spotlight and little interest in accolades, just a serious demeanor about playing basketball.  He can shoot, and his focus on functioning as part of a unit instead of being the star will help this group coalesce into a team – something that never happened last season.

It’s hard to give a firm appraisal of a freshman’s behavior and intent after simply watching a scrimmage and a couple of skills competitions, but three-point contest Max Hoetzel is either a charming guy who pranked the crowd with a lot of blather about how he doesn’t lose shooting contests and knows Hollywood stars (he’s from Calabasas, CA), or he needs to acquaint himself with humility in the same way someone bitten by a bat requires rabies shots.  He’s a much better shooter than screener, but that isn’t unusual for a freshman.

During scrimmages we get to see everyone on the roster play, and it’s always fun to appraise the chances of some of the unheralded new blood.  Nate Ritchie was an intriguing presence on the floor.  He won the slam dunk contest as much because competitors like Williams and Hanner Mosquera-Perea made their dunks too complicated.  If Williams went old school Jordan on us, and marched back to the opposite baseline and then propelled himself to the rim from the foul line (as he no doubt can), the roof would have come off the Hall, and Williams would have been carried from the floor as a conquering hero, but I digress.

Ritchie was also impressive in the scrimmage because he appeared to be a natural leader whose only interest was the success of his team.  That counts for me – especially at Indiana where leadership is sorely needed.  It might be awhile, and like I wrote earlier, judging the character of a player during a 20-minute scrimmage is a crap shoot, but I give Ritchie a shooter’s chance of making an impact beyond that of a scout team contributor.  We’ll see.

All in all, I liked the vibe of the team.  My being more optimistic about this edition of the Hoosiers wasn’t too high a bar to clear, but I got the feeling that Indiana has a chance to win some games it shouldn’t, and most of the others it should.

That might be enough to satisfy the ravenous thirst of fans whose whistle was whetted by a couple of consecutive Sweet Sixteens before last year’s disappointing regression to the years of rebuilding.