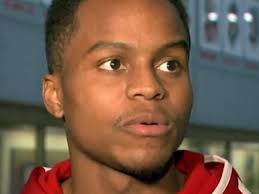 Yogi Ferrell spoke to the media yesterday and claimed responsibility as a leader for the behavior of the Hoosiers, which was refreshing. (pic credit to The Indianapolis Star)

Sometimes the messages we send aren’t those that were intended, and when Indiana University point guard Yogi Ferrell stood in front of the media yesterday and claimed responsibility for his aberrant behavior as well as that of his teammates, I had one immediate and lasting thought – why didn’t coach Tom Crean do the same thing the night before on his radio show.

So the 21-year old point guard is responsible for the wayward actions of his teammates, but the coach isn’t?

Ferrell said, “We, the Indiana basketball team, have let down our fans, family and friends, and those before that have made Indiana basketball what it is today.  We are embarrassed by our actions, even I have made mistakes. I have owned up to those mistakes. Me, being a leader of the team, I have to hold guys more accountable to their actions and what those actions can do to this program.

“The root cause is the entire team, ourselves. It has nothing to do with the coaching staff. Coaching staff is great. (They) get us ready for each game. It’s just with the team. We don’t hold each other accountable.”

I like Ferrell, and I always have.  He was a diligent and hard-working kid as a sixth grader, and that has never changed.  Yes, he screwed up during Little 500 weekend by trying to get into Kilroy’s Sports with a fake ID two weeks shy of his 21st birthday, and made a bigger mistake by bringing freshman Stanford Robinson with him.  Bad decisions.

What has Crean done?  He suspended the two players who tested dirty (Robinson and Troy Williams) for four games, and the freshman (Emmitt Holt) who was cited for illegal consumption and OWI following the automobile accident that sent Devin Davis to the hospital with a skull fracture was suspended for the same period.

The games that will be missed by the three players will be two exhibitions and games against Mississippi Valley State and Texas Southern.  The first game they will be eligible to play will be the first true challenge for the Hoosiers against SMU.

It’s impossible to avoid the deduction that Crean is putting wins ahead of discipline because of that timing.  The college junior is claiming responsibility for a lack of discipline on his team, and the coach is plotting the timing of suspensions to coincide with the games when those players will be needed.

In February, Hanner Mosquera-Perea was arrested for driving with a blood alcohol content of more than twice the legal limit after driving the wrong way down a one-way street at 3:11 in the morning.  He was suspended for two games during the Big Ten season.

If Crean has stood in front of the media, and said “This is my fault,” I missed it.  If Crean has taken actions that elevated discipline above the importance of the on-court result, I missed that.  The players’ behavior over the last 8 1/2 months would indicate they missed it too.

Click here to take the best possible care of your teeth with the help of an IU Dental School graduate – Dr. Mike O’Neil

If the guy who is paid more than three million bucks per year to establish the culture for the Indiana Basketball team isn’t responsible for that culture, and Ferrell is, Yogi is grossly underpaid as a scholarship athlete.

Among the first behaviors children are taught is to take responsibility for their mistakes.  The first thing adults learn as they enter politics or business is to deflect all blame for everything.  Corporate offices and the U.S. Congress are filled with very well-paid people whose only skill is avoiding direct culpability for mistakes.

Sad to learn that Assembly Hall appears to be no different.

2 thoughts on “Indiana Basketball – Why is Yogi Ferrell responsible for player behavior as a leader, but Tom Crean is not?”