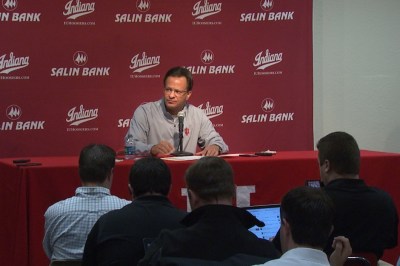 Tom Crean answered questions about team issues for longer that the 40 minutes of a college basketball game.

Never has a coach and team needed a basketball game so much.

The focus of fans and media has been trained on the off-court issues of the players on the Indiana University basketball team since Saturday’s injury of player Devin Davis – an injury suffered at least in part because of illegal alcohol use.

Two days later, the announcement of two suspensions for positive drug tests was made, and the math became clear.  Whatever level of discipline Tom Crean believed helped create the culture in Bloomington was the cause of creating an environment where players didn’t listen or respect authority.

Six of 13 scholarship players had run afoul of alcohol-related laws, drug testing protocols, or an SUV in 8 1/2 months.

Crean and his team need to briefly change the channel if only for their own sanity.  A basketball game – even an exhibition against an anonymous Northwood University – fits the bill just fine.

All associated with the program feel as though they are under siege, and are likely exhausted by wrestling with the culpability they share in both causing these issues and battling to ensure they are not repeated.

Answering a battery of questions about why three players are under suspensions that end as the real games begin is not what anyone rolls out of bed hoping for.  To be quizzed about what kind of permissive society of extravagance and debauchery has been created and allowed to fester at IU is even worse.  Accepting the notion that a teammate/player is in the hospital battling to regain cognitive functionality because of the culture you created or the decision you made is unthinkable.

Of course, Crean is responsible for that culture as each opportunity to bring meaningful penalties to bear against wayward players has come and gone unanswered.  The continuation of self-indulgent behavior among players reveals that ineffectiveness.

A certain amount of entitlement is always anticipated and tolerated with celebrities like members of the Indiana basketball team.  All eyes go to them on and off campus.  They are the most recognized people in Bloomington, and the battle between the coaches and sycophants for their attention and allegiance is always being waged.

Some people listen when told by strangers how great they are, and then they reject the corrections attempted by authority figures.  That causes the problems made very public over the last 8 1/2 months as law enforcement officials in Bloomington are no longer willing to handle alcohol fueled mischief with basketball players differently from the common students.

And Crean looks like a camp counselor whose cabin full of sixth graders has decided that whatever punishment might be forthcoming is worth the fun running wild represents.

That doesn’t make Crean a bad man, or the players a bunch of drunken sots.  It does mean there is a disconnect between them that has resulted in the players tuning out the man paid handsomely to be their leader.

Click here to treat your teeth to an excellent level of care by Dr. Mike O’Neil – the best dentist in Indiana

So tonight, they get down to the business.  Basketball returns as a safe refuse for young men exhausted by the challenges their immaturity has wrought.

The decisions at 7:00p will be whether or not to switch off a screen or chase, not whether to suspend a player or send him home – not whether to get behind the wheel of a car after drinking or to Uber a ride back to the dorm.

If Crean hasn’t been able to affect a change in behavior or get the attention of his players, maybe a teammate recovering from a fractured skull and brain injury has.  Maybe the relentless questions and rampant criticism will serve to provide a level of adversity that cannot be ignored as decisions are made after the game tonight.  Maybe they just don’t give a damn one way or another and will decide they still know best about how to enjoy themselves.

Nature has a way of ratcheting up consequences until somebody pays attention.  Lessons come hard for college students, and sometimes coaches too.

Tonight, though, safe harbor will come in the form of the game they all love.