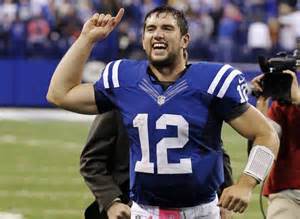 For Andrew Luck to run off the field looking like this in Glendale, Arizona, it’s likely he will have to find a way to win in Denver’s thin air, or the awful January weather in New England.

One important fact about the NFL Playoffs – 20 of the 32 teams will be jealous of the #6 seeds who eke their way into the postseason.

The Colts have been envied by at least 20 teams after all but two regular seasons since 1999, and it’s very likely that will be the case as the calendar rolls from 2014 to 2015.

Fans see an AFC South Championship as a virtual birthright for the Colts, but while the Colts could wrap up a division championship this weekend, things could unwind quickly if they don’t take care of business against the Browns in Cleveland on Sunday.

Here are some scenarios for the Colts earning a spot in the playoffs, one where they may not, and helpful guidance in what they need to do to host games throughout the playoffs:

Winning the AFC South this weekend

If the Colts beat the Browns and the Houston Texans lose in Jacksonville, the AFC South belongs to the Colts because of their insurmountable lead in the record against common opponents tiebreaker.

If the Colts fail to win the South while in Cleveland, they have an opportunity to wrap it up head-to-head next Sunday at Lucas Oil Stadium.  A win against the Texans, and the AFC South title stays in Indy for the eighth time in 13 years.

If the Colts fail to win the division on 12/7 or 12/14, things get murky.  If the Colts get to 10 wins, it’s over, so if they win two of their final four games, regardless of which they win, – done deal.  If Houston wins out (@ Jax, @ Ind, vs. Baltimore, vs. Jax), the Colts have to win two of the three remaining games not involving Houston.

Not winning the AFC South, but getting into the playoffs via the wild card

The Colts would automatically qualify for one of the top four seeds by winning the AFC South, but which one they land in depends on a dizzying number of factors.

This is the bare minimum – the worst of the best.  Even if wild card teams have a better record, the top four spots are reserved for the division champs.  Win the AFC South, and #4 is the lowest the Colts will start the tournament.

Climbing past the Cincinnati Bengals (currently 8-3-1 in the #3 slot as the leader of the AFC North) or whomever wins that division isn’t too high a climb.  They are only 1/2 game ahead of the Colts due to a tie against the Panthers earlier this season.  The Colts beat the Bengals 27-0 in week seven, so should the Colts defy some long odds and post a rare tie during the last four games of the season, they would have the tie-breaker advantage against the Bengals.  Win one more game than the Bengals, and the three seed is the minimum the Colts can expect.  The Bengals still have two games left against the Pittsburgh Steelers (7-5), so that division could spin another way.  The Steelers hammered the Colts 51-34 in week eight, so the tie-breaker belongs to the Steelers should they win the AFC North.  If the Steelers and Bengals split their home and home, the Colts can win out for #3.

This is where things get a little squirrelly.  Let’s assume for the sake of simplicity that the New England Patriots (9-3) and Denver Broncos (9-3) are the two teams we are dealing with – although Denver is nowhere near a lock with the San Diego Chargers (8-4) breathing down their necks and a game remaining between the two teams.  The Broncos play Buffalo (7-5), San Diego (8-4), and Cincinnati, (as well as Oakland in week 17, but that doesn’t count), so a lot of work is yet to be done to determine the AFC West champ.

The Colts lost to the Broncos in the season opener, so the tie-breaker belongs to them.  The same is true with New England – winners against the Colts on November 16.  Barring injuries, it’s safe to assume both teams will at worst split their last four, which means, minus a four-game run of wins to end the season, the Colts are looking at potential trips to inhospitable domains for the divisional round as well as the AFC Championship.

As is always the case, winning takes care of everything.  The Colts winning this Sunday at Cleveland will be a good start toward bringing clarity to their road to Glendale, Arizona.