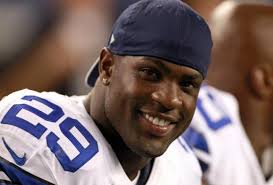 DeMarco Murray is smiling now, and he should. But if history is any guide, that grin won’t last long.

Take water from a well too often, and it runs dry.  Call a running back’s number too often during a season, say goodbye to longterm productivity.

DeMarco Murray had 41 touches last night for the Dallas Cowboys in their 41-28 win at Soldier Field in Chicago over the self-immolating Bears, and the 32 rushes of those 41 touches put Murray on pace for 395 carries in 2014.  That’s a lot of bucket dipping into a shallow well.

There are six running backs in the history of the NFL who have carried the football 395 times or more.  They are Larry Johnson (2006), Jamal Anderson (1998), James Wilder (1984), Eric Dickerson (1986), Eddie George (2000), and Gerald Riggs (1985).  Other than Dickerson as an outlier, the other five never had another season that measured up to their busiest, and four of them never came close.

Former Atlanta Falcons Riggs and Anderson managed to shake off the rust once more each to eclipse 1,000 yards rushing, and Wilder of the Tampa Bay Bucs saw his productivity decline each year for the final six years of his career.  George managed to gut out three more 1,000 yards seasons, but never approached the 1,509 yards of his busiest year.

Factor in Murray’s 53 catches through 13 games which projects to 66 for the full season, and Murray may finish the season second all-time in touches – behind Wilder’s 492 total touches in 1984.

When you look at the all-time leaders in rushing attempts for a career, the top eight names are Emmitt Smith, Walter Payton, Curtis Martin, Jerome Bettis, LaDanian Tomlinson, Barry Sanders, Edgerrin James, and Marcus Allen.  Not surprisingly, none are in the top six in single season rankings.

If Murray can up his per game rushing average 10 yards over the last three games of the regular season, he will become the eighth player in NFL history to rush for 2,000.  If Murray maintains his 154 yards from scrimmage average, he will finish with 2,460 – the second highest total in NFL history, just 49 yards short of the all-time mark set by Chris Johnson of the Tennessee Titans in 2009.

This is the final year of Murray’s rookie contract, and regardless of the number of times he touches the ball he will earn just short of $1.6 million.  The Cowboys will either overpay next year for a player who is virtually guaranteed not to eclipse his 2014 numbers and productivity, or someone else will.  That’s economics for running backs in the NFL – underpaid through their first contract, overpaid for the rest of their careers – if they make it to a second contract.

Click here for a $1 comprehensive dental exam by the best in the biz – Dr. Mike O’Neil of Today’s Dentistry!

With running backs like Murray, the game is to get the most out of them while tread remains on the tires, and Murray is providing great return on investment right now for the Cowboys.

The margin between success and failure for running backs in the NFL is razor thin, and needs to be harvested while it’s ripe.  Murray appears to be on target for a comet-like career similar to Johnson, Anderson, Wilder, George, and Riggs who were wrung virtually dry during their singularly great seasons.

Running backs are like spectacular wines.  They need to be consumed at the right moment, and Murray’s time to shine is right now.

What he’s going to do with the rest of his life is not Cowboys owner Jerry Jones or coach Jason Garrett’s concern.  Getting him the ball often enough to mitigate Tony Romo’s mediocrity is the game right now for the Cowboys as they try to qualify for the playoffs for the first time since 2009.

I just hope Murray knows to enjoy the magic while he’s got it.