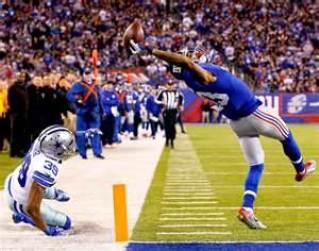 The most enjoyable football player for me to watch this past month has been Odell Beckham, Jr. His ascent from the injury list to a must-see player has been awesome. Within a couple games, it was clear the rookie was the most talented player on the New York Giants roster.

Beckham is someone who was on my radar since a couple weeks before he recovered from injury to make his NFL debut. November 2015 was his NFL coming out party. As an avid connoisseur of SEC football, I knew what kind of player Beckham was.  I was well versed in his abilities from his LSU Tigers days. His one-handed kick-off touch back catch is still a popular You Tube view.

I thought so highly of him, I picked the rookie up for my fantasy team two weeks prior to his debut. The word would spread too quickly once he started playing and I knew he wouldn’t last long on the waiver wire – not in a 14 team league, anyway, where you’re often scraping the bottom of the barrel for available players.  He’s a big reason why my team is in the playoffs, and following him closely has been a pure joy.

For people who say the David Tyree catch was the best, I have to disagree. Sure, it was amazing and on the biggest stage. But it wasn’t as poetic, graceful and skillful as Beckham’s. It seemed more luck or happenstance than raw skill. Beckham snatched a 40 yard bomb out of mid-air with his finger-tips, while fighting off a pass-interference and then landing both feet in-bounds. How? Because he’s a freak of a talent and literally practices this stuff.  Chris Collinsworth said it was the best catch he’s ever seen. It’s hare to argue. When you’re left speechless and laughing, you know you saw something special.

Besides, I had seen Tyree’s catch before. Years ago, a six-year-old Johnny Beiswanger made a similar catch. Sitting way up high in the stands on a practice day at the Indianapolis Motor Speedway, we spotted the Firestone Firehawk mascot walking Pit Lane below ready to shoot some shirts up into the stands. My kids, Johnny and his twin brother Bradley, had their arms up high, jumping up and down to get the mascot’s attention. The Hawk sent a soaring shot into the air. With my boy still jumping up and down, the shirt came to a crashing landing out of the sky right on top of his shoulder between his head and raised arm. A little cocking of the his head to the right assured a secured catch. As funny and unintended as it was, it really was an amazing catch.

What made Beckham’s all the more remarkable was the NBC crew of Al Michels and Collinsworth had just show footage of Beckham’s one-handed catch warm-up routine – put to music by the NBS Sports production crew. A few minutes later, Beckham completed “the catch.”  I would’ve been more surprised had he not just hauled in a pretty good beauty the week prior, too.  Still, this one…right one cue…had to be the best catch I’ve seen.

College Football Playoffs. November shook some teams out of the playoff picture and shook some things up. Chris Hagen’s beloved Mississippi State Bulldogs appear to be on the outside looking in after losing to rival Ole Miss, also on the outside looking in. So now it”s to the point where not only will only one SEC team make the four team playoff, but it’s conceivable no SEC team will make the playoffs, should Alabama lose to Missouri tomorrow.

That, my friends, would be a complete and utter abominable football abomination. 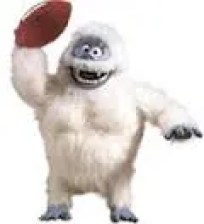 Any four-team playoff that doesn’t include an SEC team is a failed playoff system. What did you think was going to happen when SEC teams started playing each other?  Teams were going to lose. What, did you think the SEC was going to have four 11-1 teams? It was inevitable they’d beat each other up. Consequently, what did you think Ohio State and Michigan State were going to do once they entered the pathetic Big Ten schedule, not win? A two-loss Bama isn’t better than a one loss Ohio State with the schedule OSU has played? Please…  The Big Ten isn’t good top to bottom and that’s putting in mildly. Iowa had to rally to beat a sub-.500 Ball State team and Nebraska needed a last second play to beat McNeese St. And Wisconsin blew an early chance to put the Big Ten in the picture before blowing the LSU game – an LSU team that will finish fifth in the loaded SEC West. And these are upper half Big Ten Teams I’m talking about. So Michigan State and Ohio State padding their resumes with mediocre conference wins (not their fault, btw) doesn’t do much for me. Really, Ohio State’s 12-1 would be more meaningful than Alabama’s 11-2? Please… The SEC is the best conference in college football and I can’t imagine it being left out of the mix. I don’t like adding a team just because of its conference affiliation alone. Unbalanced schedules these days can really skew perspectives and reality. But no SEC team in a four-team playoff? It sure doesn’t feel right to me.

Trent Richardson. Ah, the old Trent Richardson debate. There was an entertaining segment on the Dan Dakich Show Monday regarding the value of Trent Richardson. It all stemmed from Gregg Doyle’s Indy Star column in which Doyel provided “Einstein’s definition of insanity: Giving the ball to Trent Richardson again and again and expecting different results.” Look, the idea the Colts gave a first rounder for Richardson is what’s most painful. But it is what it is. Here’s what I know, if you have to discuss all the strengths of a running back that don’t actually include running, I’d say you’re not a good running back, but more of a role player. And despite a very average offensive line, every back who has carried the ball for the Colts the past two years – Vick Ballard, Donald Brown, Ahmad Bradshaw, Daniel “Boom” Herron – has had higher avgerage yards per carry.  The way we talk about Trent Richardson is the way we would normally talk about a late rounder or undrafted free agent, not a first rounder. So, I think that clearly fuels the debate – the fact the Colts gave up so much. Teams rarely trade first round picks anymore. Heck, teams rarely use a first-rounder on a running back anymore. Lets just call the Trent Richardson deal what it is – a bad trade. It doesn’t mean Richardson doesn’t contribute or won’t contribute in the future. To be honest, while a first-rounder seemed like a lot to give up at the time, most of us were still very excited about the deal. I don’t go with the notion that Richardson can’t contribute going forward.  But the stats don’t lie. When it comes to running with the football, he’s been the most unproductive back the Colts have had the past two years.