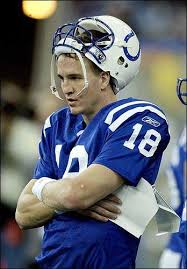 This frustration would be nice for Colts fans to see out of Peyton Manning one more time.

Peyton Manning trots on to the field, Broncos fans cheer the ancient warrior trying to redefine his legacy as an ordinary postseason quarterback.  Throughout the game, Manning fails again and again to lead the Broncos to the end zone, living down to expectations of Colts fans who were thrilled by his precision through 13 regular seasons and crushed in 10 of his 11 postseasons in Indianapolis.  Manning peels off his helmet after his 13th playoff loss, shrugs, and announces his retirement from the NFL

Eight times the best quarterback in the history of the National Football League entered the postseason with the pressure of the franchise he led on his shoulders, played tight, and bowed out.  It should be nine.

Making the final chapter of his career a triumph might be what Broncos fans hope and pray for, but it doesn’t serve the arc of Manning’s narrative nearly as well as yet another defeat – but this time to benefit the franchise where it all started.

Eight immediate bow-outs are twice as many playoff one-and-dones as any other NFL quarterback in history, and seven occurred while leading the Indianapolis Colts.  For him to end his career in any other way would cheat the gods of justice.

Sunday afternoon in Denver, Manning will take the field one more time in mid-January with his sights focused on another trip to an AFC Championship game, which then might bring his fourth trip to a Super Bowl.

Some supporters of Manning hope that he is able to leave the game on his own terms after winning a second championship ring, but for his legion of fans in Indianapolis, nothing could be more appropriate than Manning buckling under that weight through another mediocre game.  This time, instead of costing the Colts another banner, his postseason difficulties could propel his former employers forward.

And then Manning should retire to enjoy the rest of his life without exposing his aging and deteriorating body to another round of extreme punishment.

There are few bigger fans of Manning than me.  I loved every minute of watching him win the regular season chess matches against the best defensive minds and athletes football could throw at him.

Manning is to the NFL what Greg Maddux was to Major League Baseball.  His performances were masterpieces authored by an artist who understood the game and his job at a higher level than anyone else who has played the game, and had the physical tools and work ethic needed to exploit that understanding.

We will never see the likes of Manning or Maddux again, but while Manning’s 11-12 record in 13 trips to the playoffs is mediocre, Maddux’s 11-14 in 35 games is even worse.  I loved watching both play, and agonized with each defeat, but that is who they are – regular season magicians and playoff ordinaries.

It’s okay that the traits that made each magnificent in the regular season also caused difficulty in the playoffs.  It doesn’t degrade Manning as a man or competitor that his playoff record has been resolutely pedestrian.  He will certainly be a first ballot, no-brainer Pro Football Hall of Fame electee without debate.

But what in all of sports would serve poetic justice more thoroughly than Manning disappointing hopeful Broncos fans gathered to watch him outwit and out execute the Colts defense than throwing a late pick with the game on the line?  Only checking to a C.J. Anderson run on third-and-two the Colts stop at the line of scrimmage with the game on the line would come close.

A thrilled Indianapolis would exalt in victory while empathizing with their counterparts in Denver.  Seven times, they have experienced the same sick and empty feeling because Manning got tight when it counted most.

How strange and perfect that Colts fans look at the Broncos as flawed because they have the most brilliant tactician the game has known under center.  And how strange and perfect it would be in the Denver gloaming for Luck to run off Sports Authority Field at Mile High with a huge smile, and Manning with yet another grimace.