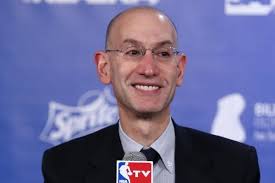 NBA commissioner Adam Silver is one year into what might be the most effective leadership in professional sports.

Nobody in a leadership position of professional sports voluntarily discusses gambling, despite it being the engine behind passionate interest among adults.  Few in a league office would want to anger half of his bosses by acknowledging the long held belief that the Western Conference is far superior to the East and a re-examination of playoff seeding may be warranted.

But NBA commissioner Adam Silver is not ordinary leader.

Less than a year later, Sterling (no relation) is a seldom referenced guy the NBA is better without, instead of a litigious buffoon who used the courts to extend his reign of boobery over a laughing stock franchise.  And that’s thanks to Silver.

Silver is the rarest of men – a guy who tells the truth and tries to do the right thing despite working for 30 men with billions of dollars at stake.  Most allow greed to overpower whatever semblance of a moral compass they had when their dream job was offered, and they go along to get along to keep a strong grasp on the gig.

NFL commissioner Roger Goodell comes immediately to mind as an example of a clerk who decided to accept the reality that whatever power he has is gifted by the owners, and that operating with the best interest of the game takes a backseat to feather-ruffling aversion.

Silver seems to be crafted from different cloth.  Emotional, decent, smart, and direct, Silver is exactly the kind of leader the NBA (or any pro sports league) needs.

There are plenty of good reasons for gambling of professional sports to remain in the shadows of society, and the most important is that the guys who manage that illegal business and profit from it tend to be unpleasant when their livelihood is threatened.  Speaking out about how gambling should be legalized and regulated is perfectly logical, but quite unpopular with those who gain from the status quo.

As for the playoff re-seeding, the owners of Eastern Conference teams like to profit from participating in the postseason, and the idea of seeding without regard to conference affiliation isn’t going to be popular with them.

Silver has spoken out recently that seeding may be better done if the 16 teams with the best record qualify for the postseason.  I think a lot of problems might be solved if all 30 teams are seeded and qualify for an additional best two-of-three round, but that is a pipe dream.  I would also like for the NBA to expand to 32 teams with franchises being granted to Louisville and Seattle.  Neither are likely, but with a firebrand like Silver at the helm, why not dream big?

It’s nice to see a commissioner speak publicly about what might be best for fans and the game, rather than stay safely within the owner-mandated margins.  Job retention is a ridiculous and hollow goal, regardless of the silly levels of salary.

Doing what will enhance the fan experience, ensure fairness, acknowledge reality, and embrace reason should be the goal of every commissioner.  There are those who believed that castration was a prerequisite for accepting the appointment into the position of commissioner.  Every time Silver opens his mouth, he proves that assumption wrong.

He’s only one year into his reign, but already Adam Silver is the only commissioner consistently worthy of fans’ respect.