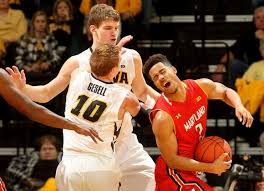 Adam Woodbury continues to go Three Stooges on opponents, and the Big Ten needs to stop it and coach Fran McCaffrey’s defense of his player.

Against Wisconsin, Iowa center Adam Woodbury poked two different players he was defending in the eye.

ESPN analyst Dan Dakich called Woodbury’s behavior “gutless” and “cowardly” because that is exactly what poking an offensive player in the eye is – unless he has vision clouding cataracts or an inner ear infection causing poor balance.

Iowa fans lost their collective mind, and threatened Dakich for his characterizations of Woodbury, and coach Fran McCaffrey was even less generous, “Danny Dakich is so far out of line. He’s just lost it on this one. He doesn’t know Adam Woodbury. And for him to say the reprehensible things he’s said about an amateur is inexcusable. It’s absolutely inexcusable that his network would allow him to say those things of things about a guy he doesn’t know.”

That was all well and good until Woodbury poked Maryland freshman Melo Trimble in the eye yesterday.  Any confusion as to intent was cleared up with that incident.

McCaffrey again turned surly during the postgame press conference when asked about Woodbury’s proclivity for poking opposing players in the eye, “Next question,” he said. “Ask an intelligent question.”  He was then asked why it’s not an intelligent question.  McCaffrey responded, “Because I said so!”  Wonderful example for the young men McCaffrey is paid to teach.  I’m guessing McCaffrey was a hell of a fifth grade debate team member.

The next intelligent question for McCaffrey should come from the Big Ten office as it evaluates the behavior of a player, who at worst is unable to defend without purposely shoving his finger into the eyeballs of opponents, and at best cannot measure distance effectively enough to avoid making digital contact with an opponent’s eye.

That question should be, “Why should our league continue to allow a player to compete when he shows an inability to avoid poking opponents in the eye?”

McCaffrey’s answer will likely be a little less peevish than what he delivered to the media members who asked reasonable questions about a kid who has endangered to health of three players in the last three weeks.

The Big Ten’s primary responsibility to student-athletes should be to keep them safe from harm predictably done to them by an opponent without the ability (either psychologically or physically) to avoid those incidents.

Because of that, Woodbury should be suspended for the remainder of the season.

If not, there should be no consequence for players who take justice into their own hands and exact revenge on their own terms.  Open season on Woodbury is a reasonable result of his purposeful and dangerous defensive tactic.

That McCaffrey has been such a staunch defender of that reprehensible or historically clumsy behavior deserves its own level of scrutiny and discipline by the conference.

At the minimum, McCaffrey should keep his mouth shut until he has an actuary compute the odds of a player accidentally poking three opponents in the eyeball as they stand still with the ball inside the same three-week period.

And coaches should reconsider any decision to criticize Dakich’s analysis of player behavior.  No one understands it better, and no one is more willing to tell the truth.