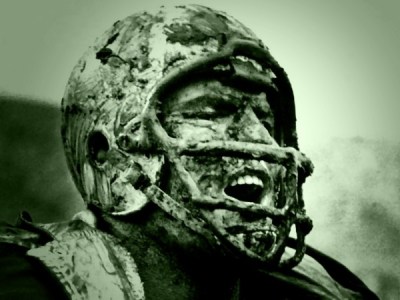 The NFL came of age in the 1960s, exploded in the 1970s, and became America’s Game in the 1980s.  Two men were at the forefront of that evolution.  Commissioner Pete Rozelle understood the potential of the NFL, and NFL Films founder Ed Sabol knew how to frame its magnificence.

Sabol died yesterday at the age of 98 – a good and long life to be sure – with a legacy that rivals or eclipses those of the hall of fame athletes he filmed in slow motion and displayed in all their grace and fury.  Every kid when I grew up couldn’t wait for two things – the next edition of Mad Magazine to be released and for NFL Follies to air again.  This was during the days when DVRs, videotape, and cable didn’t exist.  We watched what was shown on the three or four stations that were available, so those shows were appointment viewing among the considerable dreck.

The technology in the late 1960s and 1970s was incapable of showing professional football live as it is today with close-ups and audio that fills your living room.  Sabol brought highlights to fans, but more important was the sense of awe that the music, coach’s audio, and tight shots of brutal Dick Butkus hits and majestic runs by Gale Sayers that made NFL Films unique.

Without Sabol, someone would have come along as technology advanced to show football from field level, but it was Sabol’s love and understanding of the game, sense of the dramatic, and wonderful sense of humor that helped kids embrace the NFL in a way that remains unavailable today for the NBA, MLB, and NHL.

Genius is a word that is overused to the point its meaning is minimized, but Sabol was truly a genius who indulged and shared his love for a game in a way that revolutionized the sport and helped build the NFL into a pop culture monolith.

NBC news anchor Brian Williams has taken a leave of absence from delivering the “news” to Americans because it has been revealed that he exaggerated his role in several events he covered.  That used to be death sentence for someone trusted to deliver information and perspective.  Not anymore.

The sad truth is that news has evolved into entertainment, and that viewers only want to watch, hear, or read what they agree with or are titillated by.  The person delivering it is inconsequential in terms of his or her trustworthiness.  Good looks and a calm, friendly demeanor while reading stories written by others draws viewers, not honesty or truth.

Williams will be back after some much needed image massaging because he is no less trustworthy today than he was during any newscast since 2003 when he lied about the helicopter in which he was traveling being hit by an RPG in Iraq.

It’s pathetic, but given the way we consume news today, Williams is no worse than anyone else among the ambitious, self-aggrandizing celebrity news readers for whom the quality of journalism is only a fleeting concern.

Oddly, this is more likely to help his career than harm it because it will make him more famous, and what matters more than that?

Indiana University’s basketball team is pretty good this season.  Going into tomorrow night’s game against Maryland, the Hoosiers are 7-4 in the Big Ten.  Minus an unlikely collapse, they will return to the NCAA Tournament after a one-year hiatus.

Most fans are quite pleased with the Indiana’s fortunes on and off the hardwood.  A perfect Academic Progress Rates of 1,000 for several years running, players graduating, rule violations being kept to those of the minor procedural variety, and more wins than losses seem to be enough to keep hope alive that brighter days are ahead in Bloomington.

That 2015 is seen by many as resurgent for the Hoosiers says more about the fans than the program itself.  Hoosiers love to talk about how Indiana is a top five national program despite one Final Four trip in two decades, but the preponderance of evidence stacking on the side of the contrary is daunting.  Among programs in Indiana, Butler and Notre Dame have been significantly more successful over the long and short term (despite Butler losing to IU two months ago), and Purdue out hustled and outplayed Indiana just a couple of weeks ago.

I have no problem with Indiana being the program they are.  There is some success, and the promise of an education is being kept to student-athletes.  Okay.  That’s fine.  But fans’ insistence on yammering incessantly about national relevance is silly.  The only reason Indiana gets covered as an elite program is that the fanbase is relentlessly eager to consume information about the Hoosiers.  Fans = elite.  Hoosiers = okay.

The only thing extraordinary about Indiana’s basketball program is the passion of the zealots who follow the Hoosiers 12 months a year.  Middle of the road in the Big Ten with a lack of inroads to consistently recruit Indiana prep stars is not a recipe for longterm success, unless the word success is redefined as the status quo in the middle of the pack.