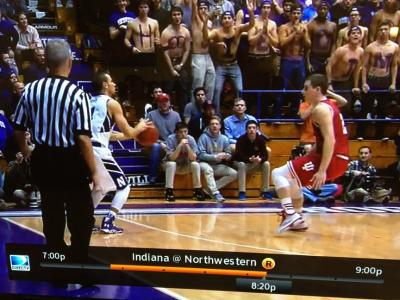 Hands down during a defensive closeout allowed Northwestern’s Tre Demps to make the three-point shot that resulted.

There are a million sayings about the importance of defense in basketball.  One of the most concise and on-point is “Defense travels.”

Better than any other, that axiom explains why Indiana was unable to beat Northwestern with so much on the line last night in Evanston.

Tom Crean discussed ad nauseum during the postgame press conference how Indiana’s inability to knock down shots cost them the game, but after one half of basketball where Indiana shot lights out (9-of-14 from beyond the arc), the game was tied at 40.

Another great saying among coaches is “First, you need to out-coach the fans.”  In “The Outlaw Josey Wales”, Fletcher tells Senator Lane, “Don’t piss down my back and tell me it’s raining.”

When Crean tries to spin the reason Indiana loses toward shooting woes, he underestimates Indiana fans’ ability to watch basketball with a critical eye.

Indiana loses, and has lost, because of defensive lapses that are elementary.  Poor closeouts with hands down, inattention to the ball, and slow feet have made it easy for opposing coaches to attack the Hoosiers.

And so fans scratch their heads wondering whether Crean knows a hell of a lot about the game he is paid so handsomely to teach youngsters to play at a high level.  Crean knows plenty about basketball, but continues to spout silliness hoping that fans don’t recognize it for the pap that it is.

As long as the Hoosiers beat either Iowa or Michigan State next week at Assembly Hall, their spot in the NCAA Tournament will be secure, and that was the goal at the beginning the season.  Once into the tournament, anything can happen.

But what needs to happen beginning right now is for Crean to start leveling with fans who understand basketball at a higher level than most.  Defense is causing the Hoosiers trouble, not shooting.  Say that, and there will be a feeling of hope because then fans (and media) will have a sense that at least the diagnosis of the issue causing losses is correct.

Of the top 49 teams in NCAA D-1 as measured by RPI, Indiana has the lowest Defensive Quotient (-3.3).  It ranks 261st of of 351 overall.  Because Indiana scores a lot of points, it’s defensive quotient would be lower than most, but it’s still evidence of problems in Bloomington in the area of forcing an opponent into uncomfortable looks at the basket.

More to the point is the non-arcane statistic of losing six of its last 10 games, alternating losses and wins since the beatdown at Mackey on January 28th.

Indiana’s spot in the NCAA Tournament is still secure, but until Crean starts talking to fans through the media with a little respect for their basketball knowledge, there will be questions about the direction of the program, and whether Crean is the right guy to lead it.

16 thoughts on “Indiana Basketball – Hoosiers lose at Northwestern not because of shooting, but because they just don’t defend”