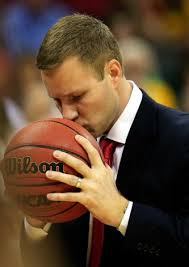 Fred Hoiberg loves teaching basketball, and fans should love him back.

Last night, a team that will be named a #1 seed in the NCAA Tournament scored a total of two points in the first 13+ minutes of a game that it wound up winning in non-dramatic fashion.  Virginia made a layup with 11:59 remaining in the first half against Syracuse, and then a three-pointer with 6:06 left.  That was the offense for more than one-third of the game.

Then they scored another 54 points over the next 26 minutes.  Was college basketball broken during the first 14 minutes, wonderful during the last 24, or both?  Did the officials widen the lane, expand the no-contact arc, shave five seconds off the shot clock, and extend the three-point line to the international distance at halftime?

Of course not.  The game didn’t change, the quality of play did.

As Iowa State plays basketball with all the offense anyone could possibly want, are ratings for their games markedly higher than those played by Virginia?  They are not.  Iowa State coach Fred Holberg is teaching the Cyclones to play exactly the kind of basketball critics say fans crave, but no one without a tie to Iowa State watches them.

The rules aren’t different in Ames, Iowa.  Yet, the Cyclones are scoring and winning.

The problem with basketball related to the rules comes from the insanity of slowing the game to a crawl at its most exciting point.  Each coach is allowed five timeouts, of which only four may be taken in the second half.  Referees may stop play for video reviews inside the last two minutes of the game for a variety of reasons – clock corrections, decisions on possession, etc…  The result can be a 10X ratio of game time to real time.  Three minutes on the clock can equate to 30 minutes of mind-numbing tedium.

If a rule needs to be changed, adjust the number of timeouts (or eliminate them), and get rid of replay reviews by officials.

The question that needs to be asked is for whom is the game played.  If the answer is the coaches – add some timeouts and extend replay to ensure all calls are correct.  Allow the games to be eight hour marathons.  Those guys have millions of dollars on the line, and exactitude in officiating and strategic execution could mean the difference between getting an extension or being fired.  That’s important stuff.

If the answer is the fans, timeouts needlessly delay the end of the contest, and who in their right mind sees the logic of a two-minute stoppage to determine off whose hand the ball caromed before going out of bounds?  Abolish timeouts and reviews to make the game more fun to watch.

The game at its core though is for the players.  The lessons learned through competition in college athletic participation are profound, and were the reason universities decided kids should play in the first place.  I doubt many college basketball players would rather execute a specific play diagrammed by the coach rather than use their skills and wills to determine whether they win or lose a game.  And kids are pretty smart about replays too.  They know bad calls even out in the end.

All that said, I’m watching more college basketball than ever, and that’s saying something.  I record at least one game per night while flipping between at least two others.  If college basketball is broken, it’s loved here, and that is with the time extending, meaningless timeouts taken by coaches so unsure in their own ability to teach the game, they need to stop it relentlessly to assert control.

Late game timeouts are like a teacher stopping a test in the middle to review a lesson, but I digress.

All that critics demand in college basketball can be granted if micromanaging coaches are driven from the game and replaced by guys like Hoiberg, who know how to teach the game.

Shaving the shot clock and re-painting lines on the court will only mask the root cause of a decline of excitement in college basketball.  Coaches who can’t teach or govern the game are the problem – if there is one.

3 thoughts on “Fixing college basketball is all about finding another 300 Fred Hoibergs to coach D-1 teams, not repainting lines and shaving the shot-clock”