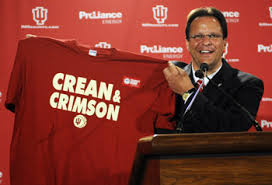 The happiest day of a coach’s stay at a school is the first, and then it’s a slow decline toward the eventual doom that will come for all but Coach K.

For the fourth time in 15 years, one of the steadiest programs in the history of the game is in turmoil, and unless a major pivot is made Saturday against Michigan State and in the Big Ten Tournament, unpleasant decisions will need to be made regarding the leadership of the Indiana basketball program.

Six weeks ago, the Hoosiers were 5-1 in the Big Ten, and looked to be one of the bright spots among a bunch of mediocrity in the Big Ten.  This morning, after the Hoosiers seventh loss in 11 games, they have played themselves onto the bubble of the NCAA Tournament.

Two consecutive years of not making the Big Dance is bad for job security in Bloomington, but to play without displaying the urgency, toughness, and unity of purpose shown by opponents makes the end of this narrative appear more immediately dire.

But it’s way too early to make that kind of assessment – just as it was to declare Crean a candidate for coach of the year because of nice results after one-third of the conference season.

There is more work to be done this Saturday at high noon against Tom Izzo’s Spartans, and then at the Big Ten Tournament before any declaration of a need for change is made, but last night’s 77-63 home loss to Iowa was not an affirmation of Crean’s ability to get the best from his team.

Some statements of fact can be made – Indiana is a terrible defensive team.  The lapses of concentration and execution are relentless, and there is a lack of comparative toughness that has been fatal.  Offensively, there are moments of grace that allow Indiana to stick around in games, but there is a reason the wins go to those who defend best.

Another fact is that Crean is despised by many with whom he has worked, annoys those with whom he regularly deals, and is seen as odd by many fans.  The conversations with those who have been on the inside that might head off any talk of replacing Crean are usually peppered with anecdotes that reaffirm the doubts of those who are emotionally invested in IU Basketball.

Coaching is a business where being fired is a virtual certainty.  The day when boxes will be unceremoniously filled and carried from an office come for all but a precious few.  Hell, even Joe Paterno was canned, and if you think that was 100% Sandusky driven, you don’t know anyone at Penn State.  Crean knew that when he walked into Assembly Hall arm in arm with former athletic director Rick Greenspan almost seven years ago holding a “Crean & Crimson” tee shirt.

If Indiana rights the ship by playing a tough brand of basketball and all five defenders finally seeing both the ball and man, Crean may be given another season to try to fix again what he originally fixed before it broke – a culture where excellence can be expected rather than dreamed of.

If not, current AD Fred Glass will need to think long and hard about a potential year eight of the Crean era that may or may not fulfill the hopes of a fan base that is growing increasingly impatient for the kind of March Madness not experienced in Bloomington since 2002 – the last time IU won a Sweet Sixteen game.

Last night’s 14-point loss at home to a similarly bubblefied Iowa team does not secure IU’s spot in the NIT nor Crean’s ticket out of Bloomington, but it was another motion filed on behalf of the growing chorus of naysayers who are tired of Indiana being a middle of the road Big Ten team rather than a consistent player in the national race for a championship.

Indiana needs to give Michigan State it’s last best shot Saturday, or the 2015 Hoosiers may fall off the ledge into obscurity and indifference, and pull with it Crean’s career.

31 thoughts on “Indiana Basketball – Can the Hoosiers and Tom Crean survive after loss to Iowa at Assembly Hall?”