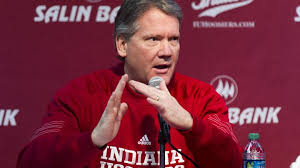 Like most people who grew attached to Indiana University Basketball during an extended stay as a student – a leisurely, but stressful six years for me – the occasionally interrupted mediocrity of the Hoosiers program under Tom Crean is baffling and a source of angst.

I spent the majority of my radio show yesterday strip-mining the nonsense to find the nugget of truth that would flip the switch on an answer that might restore a vestige of hope for a long-frustrated fan base.  As you might guess, the show ended with our search leading to only more annoyance.

My head throbbing after deciding to put off worrying about the big fix at Assembly Hall until after whatever lies ahead this Saturday against Michigan State and next week’s Big Ten Tournament, I drove to Carmel High School to watch Zach Gunn lead Hamilton Southeastern against Westfield and Derrik Smits of Zionsville show the way against Noblesville.

Because I was ready for yet more hoops, I then watched Purdue take on Michigan State in a very important game for the Boilers as they try to return to the NCAA Tournament.

Turns out it’s a lot more fun to watch great kids fight like hell on the court than to wonder about what will go on in conference rooms at Assembly Hall as Tom Crean’s future at Indiana is discussed.

Let’s start with the last game first.  Purdue was in East Lansing on senior night for Tom Izzo’s Spartans and they knew a max effort would be required to leave with a win, and effort is what they brought.  This game was as physical as it gets without somebody throwing hands.  Those who say college basketball is broken need to watch this game.

The drama wasn’t in the result of the game, but in who would triumph from possession to possession.  The Big Ten might not be the top conference in college hoops this year, but nobody competes harder than Purdue and Michigan State.  Some teams might show up during spurts, but from an effort and toughness standpoint, Purdue and Michigan State were splendid last night for 40 minutes.

It was awesome, and it cleansed my mind of all the financial concerns being discussed by those who want more out of the Indiana program than Crean has been able to provide.

Prior to that, I was so impressed again by Zach Gunn as he knocked in 22 to lead HSE to an easy win over Westfield and move on to Friday night’s semifinal against Zionsville – a team featuring the progeny of the Dunking Dutchman, Indiana Pacers great Rik Smits.

Regardless of the bleating of those who still long for a return of the one class tournament celebrated in the film “Hoosiers”, every round, every game of the tournament brings great drama because these games mark the last competitive basketball played by the vast majority of those who have spent a lifetime dribbling between cones, shooting endless baskets, and taping ankles after inevitable sprains in order to make it this far.

The only decision for a basketball fans during sectional weekend to make is which site to wander into looking for great hoops action.  Not all the games are dramatic, as HSE and Westfield demonstrated, but with the stakes so high as losers are forced to end their seasons – and seniors end their careers – it’s still a magnificent diversion from real life, or in my case obsessively pondering the future of the Hoosiers program.

Life is too short to spend every waking moment thinking asking about coaches’ buyouts, booster malaise, recruiting Missouri kids instead of those in Indiana, and “Creaning”.  Last night was for watching kids put to the test all the strength, talent, and competitive zeal they have built over a lifetime spent devoted to a silly game whose goal is the throw a leather ball through an orange rim.

There are games when it’s a shame that someone has to lose.  It was fun to watch three of those last night after a day spent asking whether the Hoosiers will be forced to retain a coach because his buyout is too steep to write the check to move forward toward hope.