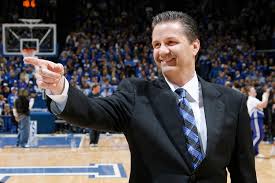 Five Indiana teams have a shot to wipe that smug smile off John Calipari’s face before his Wildcats get to Indianapolis.

Indiana a #10 seed?  Wow.  That wasn’t the only surprise of the NCAA Tournament bracket, but it was the biggest to me.

Losing nine of their final 14 games with the five wins coming against Michigan, Minnesota, Northwestern, and Rutgers twice evidently meant nothing to the committee.  Good for Indiana, bad for teams that won games late in the season against tournament bound teams but were relegated to the NIT.

Indiana will play Friday against #7 seed Wichita State, and likely bow out, but you never know in this deal.  As long as games remain – so does hope.  Can Indiana beat Wichita State?  Sure, and then Kansas will await.  Can Indiana shoot it well enough to beat the Jayhawks?  Why not.  I suppose.  I’m not bullish on Indiana because they don’t defend.

Hands down on close-outs, losing track of multiple guys when in a zone, and a lack of hustle in transition, Indiana has confounded me all season with poor defense.

Purdue’s resurgence was one of the great stories of the season.  Dead in the water in December after losses at Mackey to both North Florida and Gardner Webb, the Boilermakers found their collective mojo and began playing like Purdue as they won 12 Big Ten games, earning an #8 seed.

Matt Painter not only gets off the hot seat, but looks like a very happy guy with kids who are fighting for him.

In this lose and go home environment of the NCAA Tournament, Purdue has a couple of tough opponents if they want to get to the Sweet Sixteen.  First up is Cincinnati, and if the Boilers can get past a talented Bearcats team, undefeated Kentucky awaits.

It will take 40 minutes of outstanding play for Purdue to have a chance against Kentucky.  Having two seven-footers in A.J. Hammons and Isaac Haas is a plus for Painter, and Jon Octeus has been wonderful, but the road past Kentucky may run through Dakota Mathias’ ability to knock down threes.  Purdue is an interesting matchup for Kentucky in that they are built similarly, but Kentucky has superior athletes across the board.

To beat Kentucky, Purdue doesn’t need to be the better team – they just need to be better for 40 minutes.

Butler opens against a very talented team in Texas.  Interesting matchup between opposites.  Butler is well-coached with a roster of brothers.  Texas has Isaiah Taylor and Myles Turner at the point and the post, but have had difficulty playing well for long stretches.  The game they gave to Iowa State in the Big 12 Tournament showed them at their best and worst.

If Texas decides it wants to play 40 minutes, Butler will have trouble, but their is no evidence they’re capable of that level of focus.  If Texas gets off to a big lead, Butler fans should take a deep breath and relax.  Texas will likely revert to the mean.  That said, Butler needs to play smart and shoot it well to take advantage of the inevitable Texas lapses.

Notre Dame is a #3 seed as a result of their remarkable ACC Tournament triumph, and a win against Northeastern is all but a given.  In the second round, the winner of Butler and Texas will await.  Jerkin Grant is a great guard, and the rest of the Irish roster is good enough.  Zach Auguste brings some size.

The Irish could wind up in the Sweet 16, but will need to beat Kansas to get to Kentucky.

Valpo gets a great draw with Maryland.  Don’t get me wrong – Maryland is talented enough with Dez Wells and Melo Trimble to run Valpo out of the gym, but they sure looked like a dysfunctional group in the Big Ten Tournament who might be ready to take that long dirt nap.  There was no joy in their play, and morose teams tend to be the upset victims in March.

The Indiana team with the best chance to knock off Kentucky is Purdue, and if that is the second round matchup in Louisville, it should be riveting stuff.

While the State of Indiana enjoyed a better draw with five teams in the field this year as compared to their shutout last year, it’s very possible that fans will need to root against Kentucky to retain interest in the Big Dance beyond the first weekend.

That will be enough for me.